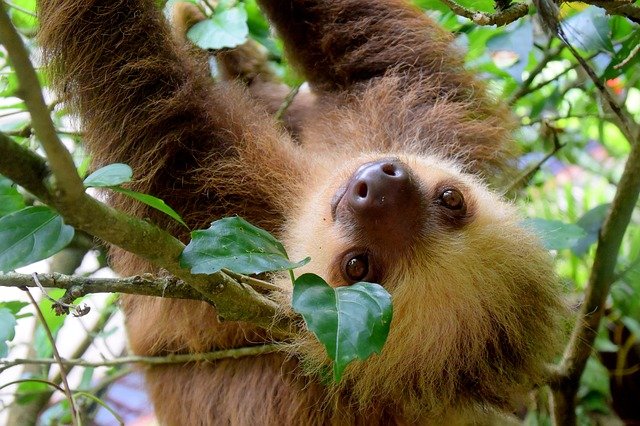 The first time I saw a sloth, I was astonished at how slow the creature could be, and how unbothered it was about what happened around it and how other species of animals could do a whole lot of things first before the Sloth accomplishes the first task it is set to accomplish.

In this article, we will be sharing with you some of our findings on why the species of sloths are slow. Enjoy your read through the succeeding paragraphs.

Description of the Sloth

The sloth is however a specie of the arboreal mammal, and is mostly known for its very slow pace during its active moments, it is also known for spending more than half of each day sleeping, in an abnormal sleep position (it sleeps on the tree while hanging upside down). The Animal sloths exist in different sizes, and in different weights, depending on its species, as well as its stage in its life cycle.

More so, the different species of sloths have their hair or furs grow away from extremities which is probably because they place their limbs above their body(s). Their appearance seems to be like a shaggy coat, that usually becomes a habitat for some other parasites like the Algae and the arthropods. 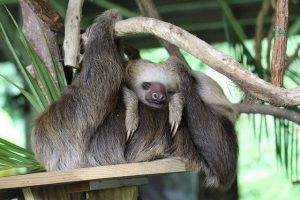 More so, the different species of the sloths are predominantly found in the area of the tropical rainforest of Central America, and South America. This species of arboreal mammal is called or were named “SLOTH” largely as a result of the very slow rate of the arboreal mammal’s metabolism, as well as the intentional act of the sloth to give itself to slow movement.

The Species of Sloths as divided into the two-toed and three-toed include the following:

Why Are Sloths Slow?

This is the major issue of this article, an inquiry into the reason behind the slow movement of the sloth.

It is common knowledge already that the Sloth is a slow animal, and basically the slowest arboreal mammal on earth; as a matter of fact, it is the slowest animal on earth. In all their activities, they intentionally take their time to do anything they want to do. For instance, when they blink, when they walk, when they climb the trees, it is all done in a very slow motion, so slow that none of the different species of sloth has the ability to really walk over a football pitch in one day; like the arboreal mammal sloth does not see any need to want to hurry over these activities.

Some of these reasons will be briefly discussed in this section.

Here is a list of why the species of sloth can be slow:

Given the heights of the ancient species of the sloth, they could be standing on their hind on ground and reach the trees, and the forage from trees without any difficulty or locomotive efforts. The fate of the different species of sloths changed after the evolution years, because the different species of sloths became much smaller in size, hence lacked the ability to reach the forage from the trees on their limbs to talk of while standing on the hind of their limbs. So, they climb up the trees, which is proof of a change in their system.

2. Diet of the Sloth

The time taken to climb the tree as well as the diet of the sloth which is totally based on their intake of leaves have also been a major contributor to the very slow movement of the different species of sloths. This is because, leaves are not very nutritious to be the major diet of any organism, not talk of being the only diet. Also, the consumed leaves do not generate calories on time, neither do they develop enough calories.

So, in order for the species of sloths to reserve energy, the species of sloths unanimously agree to move slowly. In addition to having to work and move at a very slow pace to reserve energy, they also sleep away the most part of the day from their daily fifteen hours sleep, after which they take the rest of the nine hours lumbering all over the trees. More so, given that the environment is already warm, the different species of sloths have no reason to spend a lot of energy trying to keep their body systems warm, so again the reserve some energy by the virtue of dwelling in the tropical rainforest.

Sloths are so famously slow that the word “sloth” has actually become synonymous with laziness, lethargy, and a general lack of energy.

Some Amazing Facts of the Sloth

There are a few facts you should know about the sloths and they include the following:

This period of six months is an important period in the life cycle of the baby sloth, as well as in the life cycle of the adult female sloth. This is because it is for them a period of bonding which gives the baby sloth the opportunity to learn and to develop itself, as well as gives the mother or the adult female sloth the time to be with its offspring. After the period of six months, the baby sloth finally leaves its mother’s side to begin its own independent life. However, although the sloths have left its mother, it usually adopts a part of its mother’s range, as well as continues communication with its parents through expression of “calls”.

We have in the preceding sections established that different types of species sleep for about fifteen hours per day. That is to say that they spend nearly the entire day sleeping, and it is something they do daily. They love to sleep in a certain temperature, so the different species of sloths maintain a low body temperature of around eighty-six-degree Fahrenheit and ninety-three-degree Fahrenheit. When they are awake, they also walk in and out of the shades in the tropical rainforest in order to effectively regulate the temperature of their bodies.

We have also established that when the sloth id not sleeping for about fifteen hours, the sloth is lumbering through the trees. So this simply points to the fact that the different species of Sloths feed on leaves, on twigs and on buds. The arboreal mammal (the sloth) trim and churn down leaves by firmly smacking their lips because the different species of sloths do not have any incisors, they trim down leaves by smacking their firm lips together. More so, it is important to outline that it takes the arboreal mammal a good number of days to really process what the other different kinds of animals can easily digest within a couple of hours.

Now the threat to the live of the of the different species of slugs, begins with the threat to the life of the tropical forest, because the tropical forests are usually very vulnerable to the act of deforestation. So for the different species of the sloth, the deforestation of trees and of the tropic rainforest means that the species of slugs are made homeless and are forced to migrate and live on some smaller areas of land which cannot provide enough room for a large and healthy population as the deforestation jeopardizes trees that sloths depend on for food and shelter.

As slow the sloth may be, the different species of sloths are very strong and energetic swimmers. Sometimes they drop down the treetop and fall into the water, then they extend they propel through the water by extending their arms.