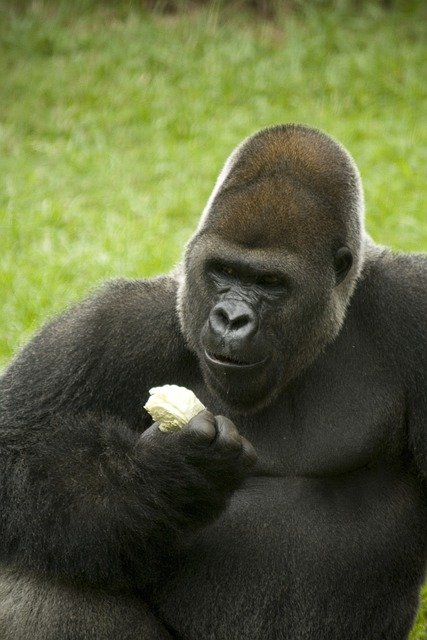 Gorillas do eat bananas and this is the focus of this article, but before we will go into the details that surrounds that, it is necessary to share a few details of the gorilla.

Gorillas are mostly herbivorous animals that belong to the family of great apes. Like many great apes, gorillas mostly live in Africa because of the climate and vegetation of the place. Africa has a lot of tropical forests, mountains, thick forests, thick bushes, and jungles.

More so, scientists have said that gorillas have between ninety-five percent to ninety-nine percent of the human DNA which scientists say means that they have similar DNA with humans, although they also say that the similarities are depending on what is added during the DNA tests. Apart from the species of gorillas, the bonobos and the chimpanzees are members of the great ape family, and they also have similar DNA as humans.

Also, gorillas are very huge as their arms are about two point six meters long (2.6 meters) although this is largely dependent on the species of the gorilla and if the gorilla in particular is male or female.

What do Gorillas feed on?

We have earlier enlisted some of the places the two species of gorillas and their subspecies inhabit, and some of those places will be mentioned especially the areas where there is a disparity in what the animals feed on.

What do Gorillas feed on in the Wild?

All animals are either domesticated or in the wild, and some may not exactly be in the domesticated or wild, but they could be kept in wild reserves for a conservation from being endangered. The diet of the different species of gorillas while in the wild are different.

This happens because not all the plants in the forests are really evergreen, so the vegetation changes with the season and in the same vein, as the vegetation of the wild changes, the diet of the gorilla changes with the change in the vegetation and the change in the season. The species of gorilla and their subspecies that live in the wild also feed on insects or rather animals that do not have any back bones like the ants, the termites, the grubs, the larvae, the caterpillars, and other animals that do not have any back bone.

What do the gorillas eat while in the rainforest?

Gorillas in the rainforest equally feed on the stem, leaves, roots, bark, pith, and other parts of any other tree in the wilderness. They also feed on insects like the ant, the larvae, and the termites of various invertebrates (that is animals without back bones) like we already mentioned earlier. The climate has an effect on the vegetation in the rainforest, however the effect of the climate is not too much on the vegetation, neither does it affect the diet of the rainforest that much.

This is basically because in the rainforest; especially the thick rainforest, most of the trees are evergreen because it is really chilly and there is usually the presence of the dew that makes it possible for the vegetation to flourish, so the change in climate does not necessarily affect the vegetation because most of the times the climate stays the same that even little changes are not necessarily observed.

What do the gorillas eat while in the zoo?

Interestingly, one of the preceding sections of this article stated that there are animals that could be reared in the farms or backyards at home (and they are called domestic animals or tamed animals) for subsistence reasons or for commercial purposes, then there are animals who are untamed (the wild animals that are not used to having humans around them, and are often aggressive) these category of animals are very free exploring nature and all there is that nature has for them in the wild.

And then there are those animals that are usually caught and put in an environment that is meticulously designed to be an imitation of a real wild zone. Now, the zoo is one of such places designed to imitate the imitation of the wild, sometimes the zoo is just designed to be habitable for the different kinds of animals and the different species of these animals. More so, animals are put in places like the zoo to prevent them from getting endangered and then prevented from going extinct.

So while in the zoo, the species of gorillas and their subspecies feed on a different diet. They feed on things like a high fiber primate biscuits that is exclusively made for the herbivore.  They also feed on a lot of fruits, they feed on different kinds of nuts and on eggs, the gorillas in the zoo also feed on very green leafy vegetables, as well as on other vegetables that are not very leafy.

Apart from drinking water to quench thirst, the species of gorillas that find themselves in the zoo are also giving liquids like herbal teas, or liquids that are extracted from sugarcane. Sometimes they are given the sugarcane just as it is to eat.

Species of the gorillas in the zoo are fed a whole lot of things but these feeds are properly portioned in a way that it is nutritious and very healthy for these animals. More so, they are usually fed according to their health requirements as prescribed by the vet doctor.

Gorillas feed on a lot of fruits and some of these fruits include fruits like apples, tomatoes, bananas, guavas, sugarcane, and a whole lot of other fruits and vegetables. However, not all gorillas eat bananas, and it is not because they do not want to eat bananas. The species of gorillas who eat bananas a lot are those species in the zoo, and also some of the subspecies of the western gorilla.

What this simply means is that the various species of gorillas that do not eat bananas do so because it is not available in their environment, and so when it is available to them, they will also eat it without any form of hesitation. So technically, gorillas eat bananas a lot and it is not a myth.

We could have shared why gorillas eat bananas but that will be as good as asking why do animals eat food, and the reverse title would have been why do gorillas not eat bananas but even without any further thoughts, those questions have been attempted and clearly answered here. Bananas are too nutritious for gorillas to miss out from eating them.