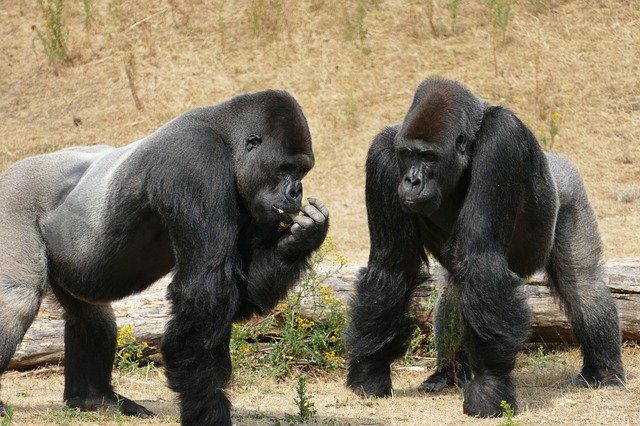 The one and most important way of getting to know why the species of great apes identified as gorillas do not eat meat is by sharing the diet of the gorillas. That is seeking to find the unknown by first identifying the known. So to this effect, we will in the next set of paragraphs share with you the common diets of the species of great ape called ‘gorilla’.

What do the gorillas feed on?

One of the major characteristics of living things is nutrition. By nutrition, this characteristics refers to the act of feeding, and not just feeding, but feeding well by eating the right nutrients that the body of any living organism needs. We will however uncover in this section how the great apes called gorillas explore their characteristics of ‘nutrition’ by sharing what the gorillas feed on.

If gorillas were to be human beings, they will most definitely be considered vegan, as a result of what they feed on. These species of great apes (the gorillas) feed on the following:

Below are the details of this diet.

Gorillas eat a lot of veggies ranging from leaves, to shrubs, grasses, bamboo shoots, and other kinds of leaves some of which humans feed on. There are scientific findings that show that the digestive system of the gorillas is similar to those of humans, which is why they could eat some of the processed foods and some of the unprocessed food that humans eat.

However, while in the wild, the gorillas do not feed have any access to the processed foods that humans eat, but they do have access to lots of green nature vegies. This is because the gorillas live mostly on places like the subtropical forests and regions; places like the renowned Congo River basin that has a lots of lush jungles, and green vegetation.

Zoologist also say that in the western lowlands, there are other species of gorillas that live in the lowlands, and these lowlands have very marshy tropical forest, with an altitude (a height) that is about one thousand and six hundred meters. In Cross River, there are gorillas found in the forests of the sub-mountains, as well as in the swampy forests, while gorillas that are found in the eastern lowland found in the very old forests of the lowland as well the forests in the mountains. These locations are generally vegetative zones, and so opens the gorillas to vegetation from which they get vegetables and plants in general.

I can imagine the surprise on your face as you read about this. Anyways, gorillas do eat meat, only that they do not eat meats that are big in size. So gorillas eat meats like termites, ants, snails, larvae, slugs, bugs, grubs and other small animals. There are also archeological findings that show that species of gorilla feed on monkeys. Gorillas need proteins in their body for a proper development of their body and their health. They also feed on carnivorous plants like the Venus flytraps and the callus plants.

The Digestive System of the Gorillas:

Animal scientists and vet doctors have proven over time that the digestive system of the gorilla and its subspecies are not designed to digest meats. This simply implies that the system of the gorillas responsible for the breaking down of food, for the absorption of the body is not designed by nature to digest meats, so gorillas do not eat meat, instead they eat insects, and bugs, and other smaller animals like the ones we already listed in the preceding section that focused on the diet of the gorilla.

The Size of the Gorillas:

Apart from the nature of the digestive system of gorillas, another reason the gorillas will not and do not eat meat; specifically big meat is the size of the gorilla. The gorillas regardless of their other types or subspecies and locations, are quite huge in size.

Recall that I shared in the introductory part of this article that gorillas are very intelligent animals, let me repeat that assertion. Gorillas are one of the most intelligent species of great apes, and scientists say that they share some sort of traits with humans and that their DNA is almost the same with the human DNA, may be this is why Charles Darwin in his theory of evolution said that humans evolved from apes, good thing is that there are no records of apes turning to humans so it is safe to say that humans are different, and the apes are equally different.

To not digress from the main point, gorillas do not eat meats because they plant their own foods. Yes, you read right, some of the trees in the tropical forests and swampy forests, and other jungles did not just grow there; some of them were planted by the species of gorilla and the subspecies of gorillas that live there. As farmers, they enjoy to eat from their own labour and this is why they enjoying being herbivorous.

Gorillas do not chase after Preys:

However, gorillas can chase after an animal not for food. When triggered to anger, gorillas can become very aggressive and they could just the animal in question and throw it away or abandon it there.

Gorillas eat healthy, as they eat a lot of plants that have vitamin B12 which are not washed away in any chlorinated water, and this Vitamin B12 is mostly among the group of bacteria in the soil. Gorillas do not need to eat meat to stay healthy.