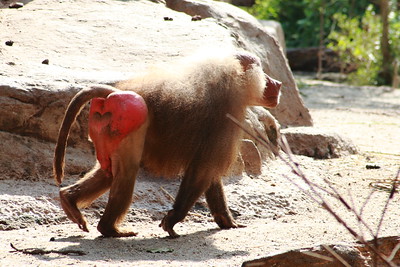 When you first start thinking about monkeys, what comes to your mind? A monkey with red buttocks. First of all, the swellings on a monkey’s buttocks gives them a good place to sit on. They even get callouses on their bums by sitting on them all the time, just like a callouses that develops on the elbows of dogs from lying down.

The monkey’s red buttocks is also an inflammation that occurs in females around ovulation, that’s when they are most fertile. With a red and very swollen ass, males can say that a female is ready to give birth.

Studies have shown that when a monkey’s buttocks is reddish and swollen more than usual, males are more attracted to it. Female monkey with red buttocks are more likely to get selected more for reproduction, they will produce more offspring and the genes of a swollen and red ass will be passed on to her offspring’s.

These swellings are enlarged areas of the genital and perineal skin that occur in some female primates that vary in size during their course of menstrual cycle. Considered a signal of fertility, male primates are attracted to this swelling; they choose, and compete for females with the largest swellings.

Sexual swellings is an edema filled with water especially the external or internal genital area of ​​female primates. However, swellings can also spread to the skin of the circumanal, subcausal and paracallosal regions. Such swellings can be divided into two groups: small and exaggerated. Small swellings is characterized by a moderate size and redness of the genitals, and can be found in Old World monkeys, New World monkeys, prosimians and gibbons. In contrast, exaggerated swellings are large in size, and its prevalence is restricted, especially in Old primate species.

Changes throughout the menstrual cycle

Exaggerated sexual swellings increases slightly in size throughout the female cycle, beginning after menstruation. For example, studies in chimpanzees showed that after 14 days of gradual growth, the swelling reached 2 days before degeneration. These cyclic changes in the appearance of the sexual skin indicate changes in ovarian hormones (estrogen and progestogen) during the menstrual cycle of the female. In particular, an increase in the size of sexual sweling during follicular phase is associated with an increase in estrogen levels, and a decrease in swelling size during luteal phase is associated with an increase in progesterone levels.

Indeed, it has been shown in ovariectomized monkey with red buttocks that these swellings can be caused by estrogen and inhibited by progesterone. For example, studies in West Africa, monkeys have shown that high levels of maturity usually occur within 7 to 9 days of the onset of maximum swelling of the sexual skin. In addition, studies conducted with white gibbons show that the maximum swelling size and ovulation overlapped closely in 80% of menstrual cycles.

The size of the sexual swellings varies not only within each cycle, but also across female cycles and across species. Specifically, the maximum swelling size increases from the cycle to the cycle of females and chimpanzees. In addition, the duration of the maximum size of sexual swellings vary widely between species. baboons, for example, have a high swelling that lasts for about 15.1 days, while chimpanzees maximal swelling duration is 10.9 days.

As for size, firmness also varies greatly throughout the cycle. For example, in chimpanzees, a state of high firmness is associated with a period of high swelling.

Want to know more about monkey with red buttocks, Read on;

Baboons (Papio) are primates and are one of 23 species of Old-World monkeys, so they have no prehensile tails. That means that, unlike their monkey cousins ​​in south America, they cannot use their tails to swing from trees.

And they are the largest apes in the world. So, because of their size – and the fact that they do not have a very good tail – monkeys often spend most of their time on the ground, using their feet and hands to walk, rather than sitting in trees.

Interbreeding is common, so there are hybrids, which makes classification difficult.

The five most commonly accepted species of baboon are:

Baboons are at home in Africa

Baboons are native to sub-Saharan Africa and are found mainly in the southern part of the continent. Hamadryas baboons are the most northern species. They live on the rocks along the Red Sea.

They have one child at a time, even though they sometimes have twins. After that they take at least a year to raise that the child. Baboons are ripe at about six or eight years of age.

All species live in large groups called troops. These troops may be as small as twelve or as large as 300 or more.

Baboons are very clever in their pursuit of food, and that can make them dangerous. That’s because they found out how to get human food – the best food, and the easiest.

Baboons have become accustomed to living with humans, which means eating the crops of farmers, making them a pest. They are also known to open car doors and enter people’s homes in an effort to find food. They are like grizzly bears or African raccoons.

They are also omnivores, meaning they eat vegetables and meat. Their common diet includes fruits, roots, grubs, and insects, grass, bark, mice and birds. And also any delicious food people leave in the back seats of their cars.

They have power in numbers

Baboons have strong jaws with sharp canine teeth and they are very protective of their food and their troop.

Males especially use brute strength to control their rivals and retain a leadership position or position in the troop. If a person has the food they want, or has the courage to try to take food from them, they can use those sharp teeth on people.

Although they are the largest apes, baboons are relatively small in comparison with humans. They are about 20 to 34 inches long with a tail, and weigh 30 to 85 pounds on ​​average. They usually do not want to attack; they may be trying to warn people. But if that doesn’t work, they’ll charge and bite.

And there is good news to report on the condition of the baboons. It is difficult to know how many baboons there are in the wild because there are so many. Only the Guinean baboon is classified as “endangered.” It has lost almost a quarter of its homeland over the past three decades due to hunting and poaching. All other species of baboons are classified as “less troublesome.