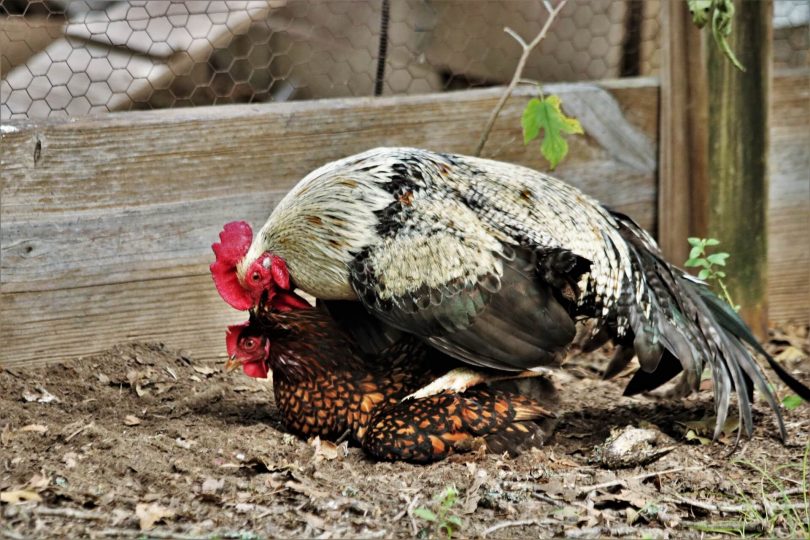 There is a lot to know about chickens and their different species, but in this article our focus is how do chickens have sex.  So, in the preceding sections, a lot of important details about how chickens having sex will be shared.

Have you seen a rooster and a hen in a position that seems like there is an entanglement? It could be the cock trying to get the hen to be in a certain position so that they can mate. Sometimes the hen may just be calm and still in the position depending on the breed of chicken and also on the hen itself, other times the hen will struggle and sometimes find a way to wriggle out, then the cock or the rooster will again start going after the female chicken (hen).

If the rooster is in an environment where there are other hens of the same species or breed, chances are that the rooster will go for the nearest hen.

In the light of the above of paragraphs, we will be looking at the question “do chickens have sex?

Do Species of Roosters have Testicles or Balls?

Oops! I guess you were not expecting this to be in this article or probably to be the next question right after the introduction. Any ways, the thing is that we cannot talk about how chickens do have sex talk without talking about the organs that should be active during the activity. So, consider this to be the first step in getting to know whether or not the different species of chickens do have sex.

So, do the species of roosters have testicles or balls?

Well, they do. The different species of chicken (roosters) do have testicles. This might be a little hard to believe especially when you look at the body of the species of chicken you may not see anything that shows that because of how the system of the chicken is.

Have you ever heard the word or the phrase ‘Caponizing chickens’?

I will tell you about it. Caponizing is the process implored to surgically remove the balls of birds. Apart from the surgical method, caponizing can also be successfully done by the implantations of estrogen after which the sex hormones of the male birds do not work again even if they are not removed from the body of the bird.

Apart from stopping the male birds from having sex, this also reduces the aggressive nature of birds which makes it calm and very easy to handle; also, this is best done when the male bird is young. The method of carrying this out is quite amazing.  This is because since the testicles of the bird are tucked up in the abdominal cavity against the spine, and has to be removed by using instruments with hooks, a barnyard surgery must be carried out to achieve the desired result.

Caponizing can also be carried out on the male chicken (rooster), and is mostly done when the chicken is still a cockerel so that it does not grow to have any effects that could come from the hormones for sex. The castrated capons or roosters or even other species of bird are called capons.

During the era of the Spanish conquests, people would spend their penny to get roosters that have been castrated because these roosters when well fed could grow to the size of a turkey with enough flesh or rather meat that also is very tender.

So, if the roosters had no testicles or no balls, what are they being castrated for? Why would castration be in the same sentence as the rooster?

So How is an egg fertilized by a rooster?

The female chickens have eggs in them that need to be fertilized before a chick is hatched. However, to fertilize an egg, mating has to occur between the rooster and the hen which brings us to our topic “Do chickens have sex”.  For animals, sex is mating, although the sex between the rooster and the hen is not as deep as we may like to think of it, or as deep as we envisage when we see them in an entanglement that has the cock on top of the hen.

However, it is not as we imagine it because the roosters do not have any penises neither do the hens have any vaginas like most mammals and humans do. Regardless of the kind of breed a chicken maybe, its body system is not very different from those of the other breeds.

It is important that you know that the hen and the rooster both have a certain opening in each of their body that is called a cloaca. This cloaca is the organ or the opening that the hen and the rooster (both sexes of the chicken) use  when chickens have sex as well as for excrement or removal of waste from the body. In addition to those other functions of the cloacal, the hen lays eggs through its cloaca.

How do the both sexes of chickens really have sex?

Have you seen a rooster crowing with one wing dropped and walking in circles, almost like its walking on a leg? Think carefully, because if you live in a neighbourhood where there are chickens, that is hens and roosters, chances are that you have seen this before.

Now when you see a rooster in such situation, it means that rooster is trying to initiate sex or rather mating with the hen. I suppose it does that to look attractive to the hen or to inform the hen of its intention.

The whole process of when chickens have sex happens only within few minutes. After the first initiation of mating the hen may not crouch for the rooster the second time, but the rooster will still go ahead and push itself on the hen regardless. In a case where a different rooster has mated with the hen, the hen may not want to have to mate with another cock, but a cock can mate for more than five times in one day.

Now this is not a guarantee that an egg will develop. Actually, the egg will not develop until some conditions are met; and the most important of these conditions is that for more than twenty-four hours the egg will be at almost ninety-nine degrees Fahrenheit.

How Many Species or Breeds of Hen can a Rooster Mate with?

Clearly from the preceding section, you have seen that a rooster can mate with the hen more than five hens in a day. the question is now if the roosters are limited to certain species or breeds.

Actually, the different species of roosters can mate so many breeds, as long as these breeds are hens. The rooster does not even care about the colour of the hen nor about the size of the hen in question, it just goes on to satisfy its urge to mate.

It is necessary to know the asymmetrical gonads of the chicken to properly help us understand how chickens do have sex. Here is how it is arranged.

However, the hen has only one functional ovary, same goes for the cock. This is because birds need to be very light in order to fly, so only one part of the gonad is developed. This is also a very common phenomenon among birds mostly because they fly.

More so, for the males of different species of birds, the testes on the right is usually smaller than the testes on the left; so if the testes that is most active is hurt or for some reason stops the function, the left one could work only that it is smaller. Amazingly it is not the same with roosters probably because chickens are birds that dwell on land.

We have established in one of the preceding sections that the rooster and the hen do not have any genital organs. We have also established how chickens do have sex regardless of the breed of chicken is simply the cloacal kiss which happens through the cloacal.

The rooster and the hen irrespective of the breed also defecate through the cloacal hole, but during when it is time to lay the egg, the excrement of defecation does not stand in the way, neither do they cover the egg.

After the insemination of a hen by a rooster, the eggs take up to four weeks or a period of twenty-eight to thirty days to be fertilized. This is because there is a sperm nest in the oviduct.

More so, most hens do not mate because they do not really need the rooster to lay eggs. What they really need to lay eggs is a stimulation from light. This explains were so many commercial poultry farms do not really care about trying to mate a hen and a cock. Furthermore, this explains why hens lay more eggs during the summer and spring because there is a great supply of light by nature. And when summer is over, commercial farmers make sure to stimulate summer in the coop.

Chickens regardless of their breeds lay eggs often and on. After hatching an egg out of itself, it takes the hen between eighteen weeks to twenty-four weeks to hit puberty. In the same vein, it takes about twenty-six hours for a hen to make an egg, after which she begins the process of producing another egg within the time space of forty minutes to sixty minutes. Compared to birds like the turkey, the hen lays more eggs. The turkeys are quite lazy, but a single hen can lay up to three hundred pieces of eggs in one year.

There are various types of pigment that makes some eggs more beautiful than the others, it could be a lovely brown pigment, or a mysterious blue pigment. The pigment that is responsible for the production of blue eggs is biliverdin which is a part of the bilirubin pigment usually found in blood of the hen.

Although there is study that shows that the pigment biliverdin is produced in the uterus of the chicken and not in the blood of the chicken.  More so, further recent studies have also shown that there is an enzyme that converts the biliverdin to the bilirubin, and in humans this is a necessary regulatory response of an innate immune.

Can Chickens be a set of twins?

Chickens can have a set of “twins” only when the ovary happens to release about two yolks at once. These yolks are however processed together in the oviduct of the chicken where only one shell begins to form around the yolks. Hence, two embryos will be formed by one egg.

Sadly, there is usually a problem once the chick is ready to hatch. The chicks need to peck their eggs in order to come out, unfortunately, the room is usually not enough for the two chicks to come out so rather than to continue pecking, they end up fighting each other. They end up dying except a C-section is done by a skilled farmer or doctor.