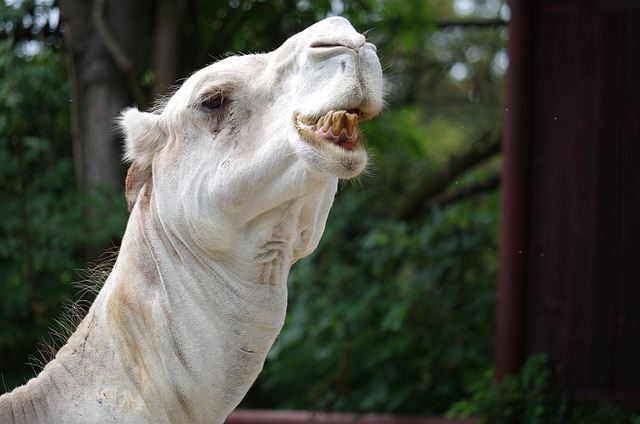 Camels are large animals, they are ruminant in nature just like the cows and goat. Camel is an amazing animal that has hoofs that can travel any desert, regardless of the temperature. More importantly, they are found in Asia and Africa and are necessary for migration and the trans-Saharan trade. In this article, we will be sharing some amazing facts of the camel, and more importantly we will be looking at answering the question: “do camels attack humans?”

Why do Camels Attack Humans

Think about it, camels have a dentition, a firm dentition at that which makes their bites quite harmful and powerful, and then the species of camels are large in size, which gives it a huge weight. There is no disputing the fact camels have attacked people vigorously, and in a manner that often resulted in death, however, camels are usually not in the habit of killing humans, or hunting preys, they are not predatory, nor are they belligerent. Camels are patient burden bearers that have helped humans bear the loads over the years.

In this section we will share why camels attack humans, and possibly kill them when they do attack them.

These reasons will be explained in clear details below.

When a camel is triggered to anger, whether it is domestic or not, an attack becomes unavoidable, and when the camel launches an attack, chances are that the victims do not survive. A few things can trigger the camel, some things like tying the camel up in the heat for a long period of time.

There has been an incident of a man in India, who tied up his camel in the heat for a long time, as soon as he untied the camel at his arrival, the camel attacked him in anger.  Passersby and onlookers who witnessed the attack said the man did not survive.

Another thing that triggers the camel to anger is starvation. When a camel is starved for so long, the chances that the camel will get angry and become aggressive is really on the high side of the scale. Humans are wrong to think that animals are without any emotions. It is not the case, animals have emotions and also have the ability to act upon their emotions.

Also on the issue of anger, a camel regardless of the specie, or if it is wild or tamed can be triggered to anger if it feels endangered. When a camel or has any feeling of being in danger, or is triggered by the action of an external organism, the camel acts on the anger, by becoming an aggressive and launches an attack on whatever it is that the camel considers to be an enemy or the cause of the danger.

The rutting season is usually the season mammals like camels, goats, sheep, antelopes, giraffes, and other mammals mate. It is also called the rut season and they mate in this season because the season is characterized with their interest in females, which is as a result of an increase in their testosterone, an exaggerated or overly increase sexual dimorphisms.

In the rutting season, male camels are known to be more aggressive so, to be on the safer side, camel breeders or nomads should consciously steer away from triggering camels. The truth is that domestic or tamed camels will always be willing to follow the leadership of humans, bear humans on their back, and also bear the other burdens of humans without revolting.

Camels are very intelligent, they are loyal, they are obedient, they also have the consciousness of will power (in that they can choose to act in a certain way) however, camels in general require nomadic men to care for them properly, and to be patient. Nomads are often advised to apply lots of caution with the camels within the rut season.

Having known the conditions or the factors that can necessitate the attack of camels against humans, we will then consider a few amazing facts about the camel very briefly.

Camels have proven to be able to survive for over six to seven months without water even during the dry season or winter as the case maybe; this is why travelers of the desert also prefer to travel the desert with camels. However, any time camels have access to water they drink what can be equated to thirty gallon of water within one session of drinking water.

Camels are also known for their long life span. Camels can live for as long as forty years which is their biological life span. So this implies that if a camel is well taken care of, the camel can leave up to forty years and die a natural death. It is important to know that camels are born with white skin or hides, they are fair or light in complexion but as they grow, the light complexion darkens to brown probably as a result of the heat they are exposed to.

The camels like most mammals produce milks for consumption. Dieticians say that the milk produced by the camel has low total fat and low saturated fat when compared to the milk gotten from a cow. Also, the milk from the camel has been proven to be rich in vitamin C and in iron, which according to nutritionists means that milk extracted from the camel can boost the immune system of human, as well as promote the stimulation of the circulation of blood which improves or boosts the health of the heart, and also boosts insulin to prevent diabetes.

Basic Identification of the Camel

While there are numerous types of camels, these camels are best identified into two types. The dromedary camel, and the Bactrian camel.

The clear distinction between the two is clearly seen in the physical appearance. Dromedary camel has just one hump on its back while the Bactrian camel have a double hump on its back. More so, the dromedary camel is also known as the Arabian camel, and is the most seen camel on earth, while the Bactrian camels are rare, but are categorically classified as domestic and wild camels.

No beast of burden has the ability to endure heat from the burning sand of the desert like the camel does. This is basically because the species of camel whether tamed or wild are covered by or in a very thick layer of hides (or skin as the case may be). This thick layer of hides or skin makes it naturally possible for the species of camel to comfortably sit on the very temperate or hot sand of the desert without any feeling of being burned.

After the rutting season, camels are expected to have conceived their young ones which they carry for a gestational period of fourteen months before birth. Camels are often strong, and as a matter of fact, after birth the young one or rather the newly born of the camel walk beside the mother within the time span of one hour.