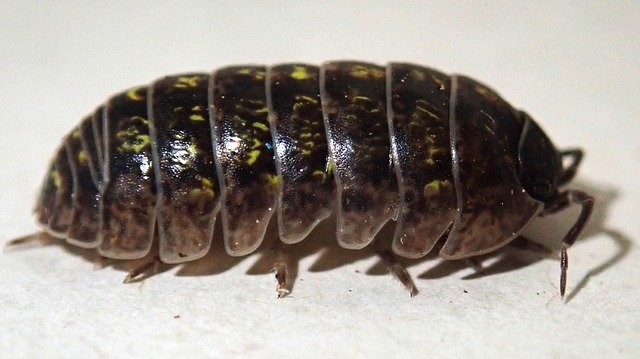 It turns out that roly polys (sometimes spelled roly polies) do not eat too much. Roly polies, also called pill bugs, can live mainly on soft, decaying materials, such as grass and leaves, and can live for between two and five years. Roly polys can also safely eat fish food, fresh vegetables, and even cardboard.

But that is not all. Roly polies can also munch on their own poop, including their own, and decaying things. Roly polies need copper to survive, and each time the bugs defecate, they lose a little bit – which is why the recycling process. This practice is called coprophagy. They have also been known to eat compost. They often make their homes in wooded areas, especially where there are many damp leaves and other rotting plants, where food is readily available. They can be found and live in piles of manure and in areas containing mulch.

Types of roly-polies and their habitats

Roly polies exists in some regions called common pill bug, doodlebug, potato bug, woodlouse, woodlice, or bug. One type of roly-polies exists, namely Armadillidium vulgare. These species are classified by the Isopoda order, which means the same foot. This is because the pill bug has 14 legs, all of which have the same shape and size.

The most popular habitats are those with high levels of organic matter, moderate to high humidity, moderate temperatures and reduced illumination.

Roly polies mostly tend to stay in moist environment due to how they breathe through their gill like membrane that is why they are often hidden in holes in the ground or under solid material, such as rock or mulch, during the day. Roly poly bugs breed in early spring. Unlike other crustaceans, they do not lay eggs in water. Instead, the female carries her eggs in a pouch full of fluid until it hatches. The babies are able to feed themselves and take care of themselves immediately after leaving the pouch. Babies will molt and peel off their outer skin twelve times as they grow older.

The great defensive methods of Roly poly bugs against predators is to run or roll into a hard ball. They can also emit odors that irritate other predators. Creatures known to eat roly poly bugs include spiders, centipedes, ants, birds and frogs. Roly poly bedbugs also feed on one another. If not eaten or otherwise killed, roly poly bedbugs can live up to three years.

Roly polies are parasites that eat dead plants and animals. Then they loosen up and thus give your soil the nutrients it needs to grow and productive in relation to plant growth. In all honesty, roly polies may benefit you as a farmer or a gardener than they are as a nuisance. Yes, in winter, these critters can eat the roots of a few plants here and there, but they do not overreact to the damage. If you think about the good they are doing compared to the damage they can do, you will see that it is probably not a bad idea to have them; in controlled numbers.

FAQ’s About What do Roly Polys Eat

Yes, that’s right. rolly-polies eat all kinds of poops. Also, they eat their own discharge, known as self-coprophagy.

Yes, indeed, pill bugs love to eat them. Roly-polies are pests of farmers. The bugs make holes in the strawberries while eating. To prevent damage to crops, farmers spray liquids such as vinegar, boric acid, or apple cider to keep them away.

How Do Roly Polies hunt?

Roly-polies are have a sort of cannibalism nature. Often, weak members or the younger roly polies are targeted by the adult roly-polies. These newborns and the weak are captured by old and powerful roly-polies and then eaten.

In some cases, cannibalism can be a condition in which the deceased bodies of roly polies are fed on by other living members. This can also be described as scavenging.

Some studies have linked the behavior of this cannibalism of these isopods with the spread of bacteria from an infected prey to an uninfected host/predator. The bacteria that has been shown to be transmitted in this way is Wolbachia pipientis.

When Do Roly Polls Eat?

Roly-polies in particular show a nocturnal tendency. They often look for food and eat at night. During the day, roly-polies are inactive and may therefore be found hiding in dark, damp areas, often under trees, rocks, or fallen leaves.

How often do Roly Polies eat?

Roly-polies can feed as much as they want as long as there is food available. In the event of a shortage, the level of food consumption decreases.

In addition to participating in cannibalism in times of scarcity, roly-polies can also feed on their young offspring during mating season.

Roly-polies are an important source of nutrients for things like shrew. Other creatures such as centipedes, owls, foxes, lizards, frogs, grasshoppers, ants and spiders find roly-polies as a major source of food.

Like crustaceans, roly polies have gills that allow them to get the water they need from the moisture inside their environment. That is why open water sources are dangerous to these tiny buggers. Any open water source can be the risk of drowning of roly polies. For that reason, roly polies do not live in ponds or swimming pools; they live in damp areas such as ditch beds and wet soil. They can often be found crouched under fallen vegetation, rocks and wood.

Where Does Roly Polies fit In the Animal chain?

Roly-polies play an important role in the animal food chain. Roly-polies are remarkable decomposers, and they play a vital role in digesting decaying matter from animals and plants.

As a result of this action, roly-polies return nutrients to the soil, thus playing a role in ensuring that other animals have a place where they can thrive. Because of their sensitivity to environmental change, roly-polies are excellent indicators of ecosystem’s health life. In addition to this role, pill bedbugs are a major source of healthy food for other animals that rely on them for food.

Yes. Sometimes they feed on living plants and even animals. These include roots, seeds, seedlings and fragrant insect eggs and other roly-polies. Stink bugs are are majorly crop and garden insects, making roly-polies desirable for pest control. Alternative feeding usually occurs only when the population grows too large to detect the availability of decaying matter. While the growth of young plants is a common dietary variation of roly-polies, they also eat the remaining fruit that insects finish.

Although they are often beneficial to have them in the garden, they are known to cause damage to plants. Specifically, they feed on the leaves and roots of tomatoes, carrots, seedlings, lettuce, peas, beans, cucumbers, mustard and fruit. In addition, when they eat seeds, they inhibit the growth of certain plants. While large number of roly polies can cause losses in gardens and nursery, serious damage is rare and roly-polies are not considered pests.