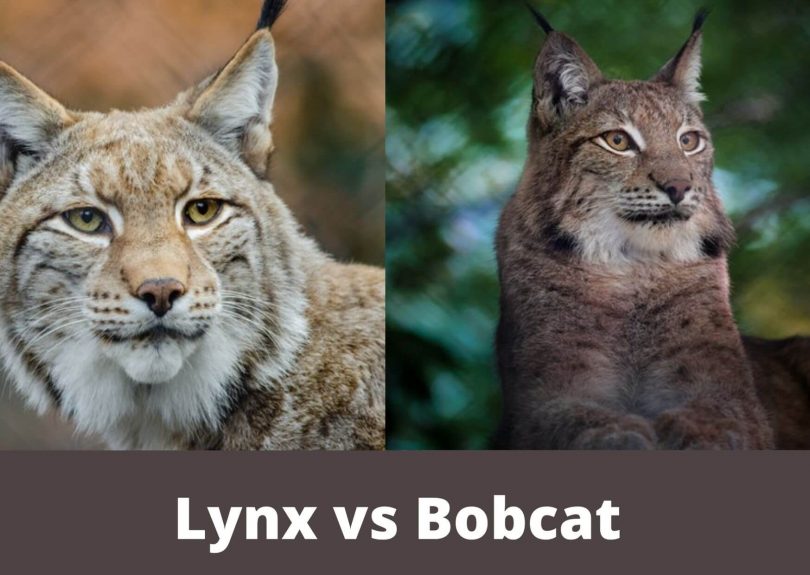 Lynx vs bobcat- what is the difference

You may have noticed that lynx looks very similar to bobcats. What is the difference between them? Read on to find out.

There are four different species of lynx cats, including the Canadian lynx (lynx canadensis) found in Canada and the rest of the US such as Washington and Montana;

The Canadian lynx canadensis, found in Canada and the northern US such as Washington and Montana, is also known as the North American Lynx. It has large thick, light gray or brown fur with light black spots. The males are slightly larger than the females. Distinctive features of the Canadian lynx include a black-tailed tip and large furry paws to keep the cat’s toes warm in winter. Canadian lynx lives in dense jungles where their prey is found such as the snowshoe hare. These cats are so dependent on the snowshoe hare for food that when the hare’s population dwindles, so does the lynx. 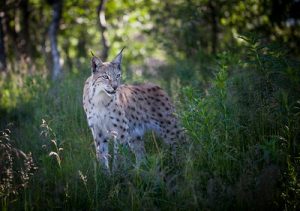 “Eurasian Lynx in summer coat” by Tom Bech is licensed under CC BY 2.0

The Eurasian lynx has long, thick, light-colored fur in winter. This type of lynx is the largest and most numerous, and most common, now found in 46 countries in Europe, northern Asia, and the Middle East! Subspecies of the Eurasia lynx are the Siberian lynx which are the largest, they can weigh up to 84 pounds.

The large hairy paws on the sole give the Eurasian lynx traction; long legs are also helpful when walking on snow, these cats are good swimmers. In the wild, their favorite food is deer and other mammals. 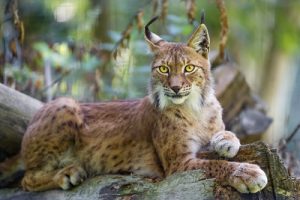 “Posing siberian lynx” by Tambako the Jaguar is licensed under CC BY-ND 2.0

The most endangered species native to Spain and Portugal. It is about half the size of the Eurasian lynx and has quite a few parts on its coat. Its hair is short and dark because of the climate.

The most rare and perhaps the rarest lynx of all cats, the Spanish lynx is found only in Spain and Portugal. It lives in an area where millions of migratory birds come together every spring and autumn; although rabbits are the mainstay of their diet, they also hunt ducks too as well. 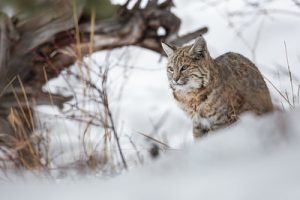 “Bobcat along the Madison River” by YellowstoneNPS is marked with CC PDM 1.0

Bobcat is known by many names: wildcat, bay lynx, and lynx cat. Some people call it the spitfire of the Animal Kingdom, because it seems fearless and will not retreat! Found throughout North America, the Bobcats look very similar to the Canadian lynx.

But bobcats have small feet and do not have furry soles as the other lynx cats, so they are not well equipped to live in areas of heavy snow. Bobcats are able to survive in a wide variety of locations, from deserts to swamps to forests, as long as there are hiding places. They often live-in rocky areas that provide refuge from the cold or extreme heat and they are very good tree climbers.

The Lynx lives in the highlands, while the bobcat lives in swamps, deserts, trees, mountains, and a variety of forests. Apart from the Iberian lynx, which is considered endangered, two other species of lynx and the bobcat are abundant in the wild. Bobcat and lynx are close relatives. They share many common features, and differ from just a few features:

Bobcat and lynx are close relatives but have several different physical and behavioral differences that distinguish them from other lynx species:

Lynx vs Bobcat – Differences in size and morphology of the body 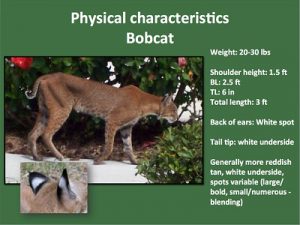 The most obvious difference between lynx vs bobcat is its size. Many lynxes are much larger than bobcat. Although their average weight is less than 60 pounds [27 kg], some male lynx, similar to the Eurasian variety, can grow up to 60 pounds [40 kg]. They can also reach a height of more than 4 feet in length, giving them a spectacular presence in the wild.

The bobcat looks like a big house cat than a wild animal, but it is very different from a domestic cat. Its size is deceptive. The bobcat is as fierce and powerful as its great cousin. At maturity, the bobcat is about 3 feet long and weighs up to 30 pounds in weight.

The Lynxes can very well adapt to cold climates. In order to thrive in cold environments, the Lynx has a long dense fur that is usually gray in color. Some species of lynx are covered with golden or brown fur. Lynx is covered with spots smaller than a bobcat. The dots are gray and often focus on the limbs. Liberian lynx are unique in this regard. It has short hair covered with many black spots.

Their beautiful, gray-brown pelts are highly prized with hunters. White furs form on the inside of the lynx’s legs and appear on the chest and abdomen. Bobcat has short, gray or brown fur with prominent red spots on the body and black belts on the legs.

The Canada and Eurasia lynx have long legs and large, hairy toes that spread out as they travel to help them adjust to the cold climate. This allows the lynx to break through deep snow to catch a prey, such as snow rabbits, squirrels, mice, and birds. The fur on the bottom of their paws acts as a protective barrier that helps protect the lynx’s feet from the cold and provides traction in slippery ground

The ears of the lynx grow sprouts tufts that grow into inches long which contributes to their sensitive hearing.

While lynx tend to live in cold forests, bobcats are found in a wide variety of terrains and climates from arid deserts to rocky, mountainous regions. Agile jumpers and climbers, bobcats have shorter legs and smaller paws compared to their lynx relatives. In contrast to the strong gray or yellow fur of many lynx, many bobcats with brown coats have dark spots that act as a camouflage helping these intangible creatures to remain hidden in their place. Their muscular bodies enable them to move faster with deadly results. The bobcat is sometimes mistaken as a mountain lion.

Both the bobcat and the lynx have short tails all around. The bobcat’s tail is tied with black stripes, and the lynx’s tail has a black tip.

Lynx vs Bobcat – Differences in Diet

Lynx and bobcat are carnivorous animals. The Lynx is specialized in food based on snowshoe hare, which represents 60 to 90% of its diet. The lynx menu normally consists of reindeer and rabbits.

The bobcat has a much more diverse diet than its rabbit-loving cousins, It hunts and eats rats, cotton mouse, oriental cottontail, fish, birds (chicken, geese, swan …) and occasionally large animals such as sheep, goat and deer.

Lynx vs Bobcat – Differences in Behavior

It is very rare to see a lynx or a bobcat in the wild. Cats live alone by nature, and they tend to avoid contact with humans. Natural carnivores, bobcats and lynx prefer to hide during the day and hunt at night. Both lynx and bobcats are predatory animals that can move fast and attack small mammals that eat them.

Bobcats are smaller than lynxes, but they form their own small size with their bold, aggressive nature. In addition to hunting small mammals and even some small deer or fawn, some bobcats also hunt and kill farm animals, such as pigs and sheep. This behavior makes the bobcats bane to many landowners, who can kill wild cats to protect their livestock on the farm. Although bobcats often avoid humans, when their natural resources are scarce, they can enter the courtyard at night, putting dogs and other pets in danger. Their ability to move fast allows bobcats to avoid the snake’s venomous strikes and kill them with agility.

In the wild, bobcats like to establish a place where they can explore their habitat. They remain motionless on their high ground, waiting quietly for the young animals to roam free. Bobcats kill their prey by suddenly striking and tearing through the animal’s neck. Their large, deep jaws are wide open so they can hold on to their stomachs.

When food is plentiful, the bobcats eat a lot, usually hiding the carcass and returning to it to eat more often. In times when their prey is scarce, however, bobcats can live longer without food.

Some species of lynx, such as the Canadian lynx, are sedentary. Lynxes are not particularly fast runners, with short distances, so they tend to catch their prey and attack once the small animal are very close. They rely heavily on their exceptional eyesight and hearing to hunt their prey.

Lynxes and bobcats are creatures are territorial creatures that mark their domain with their scent to keep other cats away. Bobcats builds their den in rocky crevice or a huge cave, and they can have several other dens within their territory. These other dens are often found in piles of brushes, old logs and other natural hiding places.

In cold climates and forested areas, lynxes use fallen branches and piles of leaves to escape the harsh weather. During pregnancy, female lynx seeks out a hidden cave, along with feathers and leaves to help keep their young ones warm.

Although both lynx and bobcats can swim, but only when needed. However, they can dive into shallow water to catch and eat beavers, fish or waterfowl. Both species of wild cats can also climb trees to escape predators or to explore their habitat.

Lynx are solitary animals, and adults meet only for breeding purposes. Lynx kittens are usually born in early spring in caves located beneath fallen tree branches, roots of large tree roots, or piles of rocks. It is common to have one to four kittens in the litter, and the mother is a single parent.

Lynx kittens are born with their ear folded and their eyes closed. When there is plenty of food for the mother, the kittens grow faster; when food is scarce, few survive. Lynx kittens are nursed for up to 5 months and during the last few weeks of nursing, they start to eat solid food.

The young lynx can feed when it is ten months old, but it usually stays with its mother for up to a year and does not reach adult size until it is two years old. Sometimes siblings who have recently left their mother go hunting together for a few months before going their separate ways.

Next Post: Do you know hibernation is a special kind of deep sleep that enables an animal to survive the extreme winter cold, find out more here.