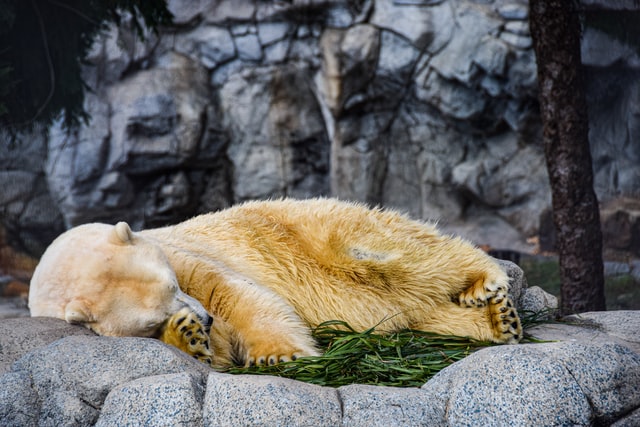 A common way to explain hibernation in animals is a long-term condition in which the body temperature drops dramatically, metabolism slows down and the animal enters a state of comalike condition that takes some time to recover or you can put it this way, hibernation is a special kind of deep sleep that enables an animal to survive the extreme winter cold. Hibernation lowers the animal’s energy needs and allows it to survive on stored fat and should not search for food. Hibernation in animals is a cyclic behavior and is caused by different cues in an animal’s environment.

Why do animals hibernate?

All animals have different survival strategies that allow them to survive in difficult or life-threatening situations. The constant, severe cold that comes with winter poses a problem for animals that cannot escape (by migrating or leaving) or adapting to it (such as growing a thick fur or a layer of fat). Winter is difficult for warm-blooded animals (those that maintain a constant internal temperature despite their environment), since they have to use most of their energy to stay warm. During winter, food become scarce for warm-blooded animals.

For some animals, hibernation is an easy way to solve some of the problems caused by winter colds, since they actually sleep during  winter and wake up when the weather is mild. However, hibernation in animals is a complicated physiological event. When an animal hibernates, its body functions such as heartbeat and breathing slows down, sometimes to the point that the animal appears dead.

How do hibernation in animals occur?

When it is time for an animal hibernate, the animal responds to one of the other natural phenomena, such as a certain low temperature or a reduction in daylight hours. These signals trigger the release of a hormone (chemical messenger) called the hibernation induction trigger (HIT) that causes major changes in the animal’s body. Their heartbeat slows down and their body temperature drops by several degrees. It takes a few breaths every minute and hardly makes any waste.

An animal falls into a deep sleep, so to speak, that it is as if it were dead. All of these hormonal responses allow the animal to maintain the necessary body processes while using much less energy than when it is awake.

Before going into hibernation, they usually have huge appetites that allow them to store as much fat as possible so that they can be burned later in their sleep. They also often make a hole in the ground where they sleep to protect themselves from the cold. As spring approaches, various indicators in their area, such as warmer temperatures or sunlight, wake them up and quickly resume their normal activities. This does not happen immediately, however. As their heart rate rises, as well as their blood pressure and respiration, hibernators often begin to tremble, gradually increasing their body temperature. After adjusting to the current level of the body (the chemical processes that take place in the body), they are ready to go about their normal activity.

Like their warm-blooded counterparts, cold-blooded animals (their temperature changes and their environment) also sleep. Animals such as frogs, turtles, and snakes are buried in the mud when their systems find enough oxygen to survive. Some insects, such as butterflies, also hibernate, and their systems produce chemicals that act as antifreeze.

Other animals such as bears, raccoons, and skunks are not real hibernators, although they do the same thing. Instead, they are considered “less sleepy”.

These “sleepy ones” sometimes wake up and eat something they may have kept or go outside to get rid of waste. Brown bears can wake up very quickly, and they usually breed in the long cold winters. Even true hibernators have built-in mechanisms to wake them up under unusual circumstances. For example, if temperatures drop so low that even an animal that hides in the winter is in danger of dying from a cold, its body will adjust automatically producing heat.

Another type of hibernation in animals is estivation which is when an animal enters a hibernation state during the summer. Some desert animals live underground when threatened by prolonged heat or drought. Estivation has enabled many desert dwellers to survive the hot summer months. It is less common than hibernation. Hibernation in reptiles is sometimes called brumation. It is different from the hibernation of mammal because reptiles are cold blood.

Let’s take a look at some animals that hibernate during the winter;

The dwarf lemur is the only primate fact known to be associated with a state of hibernation for a long period of time. Common in Madagascar, the flat-tailed dwarf lemur sleeps in winter during the dry season when water is scarce.

Like reptiles, turtles cannot produce their own body heat instead they receive heat from their environment. of receiving heat from nature. To save energy, it is necessary for them to bromate as their temperature begin to drop. Unlike hibernation, however, brumation does not involve sleep. It varies from species to the other, but box turtles usually dig a good hole and brumate for three to four months.

Traditionally based on weather forecasts, woodchucks or groundhogs as they are commonly known are true hibernators. Winter sleep can take up to five months, and during that time, the groundhog will shed a quarter of its body. During all winter sleep, their heart rate ranges from 80 beats 100 beats per minute or only ten, their body temperature drops from 99 to 37 degrees, and their respiration decreases from 16 per minute to two only.

The common poorwill is the only species of bird known to hibernate.

Instead of migrating like all of its relatives, when the insects that make up most of the food become small during the winter, the young bird gets under a rock or log and sleeps for about 100 days. During hibernation, the bird has a reduced respiratory rate, a lower body temperature, and a lower heart rate.

In late autumn, hedgehogs enter a state of torpor. In preparation, they look for the best places to build their nests, usually in a large pile of leaves or under old buildings or sheds. Hedgehogs usually wake up during hibernation, usually every two to four days, or rarely once a month. When hedgehogs wake up during torpor, they can move to a new nest. 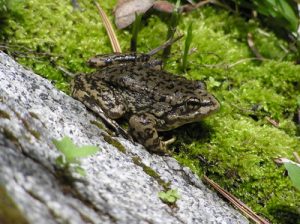 “MYLF Frog” by Region 5 Photography is licensed under CC BY 2.0

If it is very late in the winter or early spring and you find a frog that is not moving. During hibernation, the wood frog’s heart really stops beating and 35 to 45 percent of its body freezes. Wood frogs actually go through a pattern of freezing and melting often in winter. In the spring, the frogs melt and begin the mating and feeding process again.

. Snails sleep whenever the weather gets worse: when it is hot, when the process is known as estivation, and when it is cold. Coming with a built-in winter sleeping area, they are ideal for all weather conditions. During hibernation or estivation periods, snails can use mucus to cover their shells and protect themselves from the enemies. Depending on the species, snails may sleep through the night for many months.

Skunks are not true hibernators, but like hedgehogs, they can get into a state of torpor. For those in the northern regions, skunks have long periods of torpor, which lasts a few months. During the torpor periods, the skunks will spend more time in their burrows, waking up from time to time in search of food. They will breathe less and have a lower heart rate and temperature.

Almost all snakes will experience some form of hibernation, although the length of dormancy depends on location. For example, a snake in Minnesota may sleep for many months, while another in southern Texas will only go for a few weeks.. During their hibernation period, snakes experience periods of wakefulness when they’ll travel outside

Not all bees do hibernate, but bumblebees do. The bee’s life cycle begins in the spring, when the queen’s bee emerges in the middle of winter. The queen puts the workers bees first, followed by the new queens and the male bees. At the end of the cycle, the old queen and the worker bees die. New queens feed heavily, dig underground hibernation spot, and the cycle begins again. 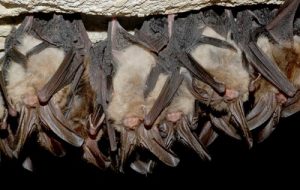 Bats enter a torpor state where temperatures are cold and need to conserve energy. Torpor periods for bats can last from a few hours to a month. During this time, the bat’s heart rate can range from 200 to 300 beats per minute to as low as 10. They do all this because in their caves, mines, or other rocky places.

Next post: Do you know that lobsters communicate by peeing on each other faces.