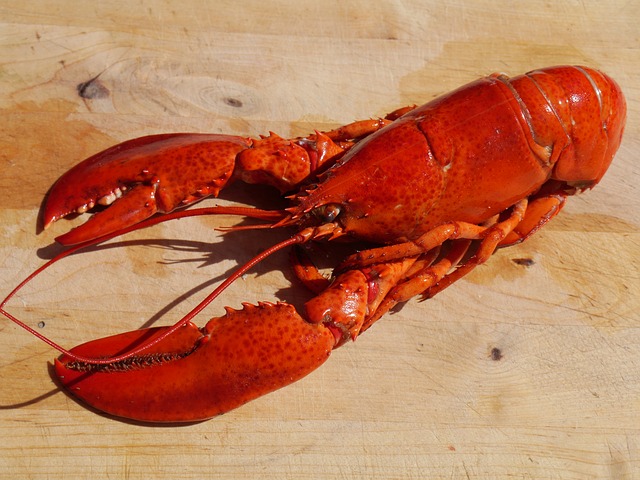 How do lobsters communicate
They have an unusual way of communicating. Instead of making noise or gesturing, lobsters communicate by urinate at each other. They are members of Class Crustacea of ​​Phylum Arthropoda, they are invertebrates. This class of animals have no backbone and hard shells such as crabs, shrimp, crayfish, and wood lice.

Small lobsters, less than 1.5 inches carapace (carapace length measured from the back of the eye socket to the back of the large body shell), hide in and out of seaweed and rocky habitats that provide adequate food and shelter from predators. Young lobsters, 1.5 to 3.5 inches carapace, are found in coastal areas. Older lobsters live in shallow warmer waters. Spiny lobsters live in tropical waters of the Gulf of Mexico and the Atlantic ocean.

The lobster can come in a variety of colors, including blue, green, red, yellow, red-orange, and white. Some lobsters are two-colored, one half of their shell in a different color, the other half with another color.

How do lobsters communicate with their habitat

Communication in the whole animal world is rarely understood we know that many animals need to communicate with some of their species for various purposes, such as mating practices or territorial dominance. In the case of lobsters, how they communicate  has increased dramatically in recent years. So, how do lobsters “talk”(communicate)? To put it simply, they pee on each other’s faces, that’s how lobsters communicate with each other.

When lobsters want to communicate, they urinate which releases pheromones or smell at the same time. There are many mysteries still involved in the production and disintegration of these pheromones. However, the lobster bladder is located beneath the brain. These rosette glands are connected to the urinary tract, so they can produce pheromones and introduce them into the urine. American lobsters (Homarus americanus) release this urine into nephropores from their large antennae, that is they pee out of their heads.

Once released the urine is pumped into a gill current which projects the urine forward. It has been estimated that lobsters can transmit urine signals up to seven body lengths ahead of them.

Why does a lobster communicate by peeing out of its head?

The lobster’s claws, which are used to catch deer and protect them, are found on the front of their body. As a result, the lobster enters its back shelter so that its first line of defense faces the main entrance to its house. Facing the opening of the cave, peeing over their heads is the most direct way for urine to reach the water around them.

In general, lobsters do not really interact. Aside from pee If lobsters get into each other’s territories more often than not it will lead to a fight; especially if they both males. They do this for competition for mating rights and choosing the best shelters.

As mentioned earlier, the dominant male has a more attractive scent which attracts the females to him. The females approach the man’s hole and proceed to pee on his face which reduces his aggression and allows the females to come into his home. The female is allowed to stay in her burrow for up to two weeks before leaving, giving the next female in the area a chance to meet the dominant male. During this time of cohabitation, the female’s urine sends signals to other females that the male has coupled up.

How do lobsters grow

Lobsters grow by a process known as molting or by shedding their shells. Before shedding their old shell, they will build a smaller one underneath. When molting, they releases enzymes that soften the shell and connective tissue. They will then struggle out of their old shell while at the same time absorbing water that expands their body size. This process takes about 15 minutes. During the time they molt, they will increase its size by about 20%.

After the molting process, the lobsters will eat more. They replace lost calcium and speed up the process of hardening their new shells by eating up the old ones. It takes about six to eight weeks before their new shell becomes hard enough for lobsters to defend themselves against their enemies. While they are still fragile and soft after the molting process before forming a new shell they hide by burying themselves in the mud or under the rocks.

The young, immature lobster (first 5-7 years) will undergo molting for about 25 times a year. Older male lobster molt twice a year and adult lobster once a year, usually in the summer. When the lobsters grow, they will only melt once in 3-4 years.

The only way to estimate the age of a lobster is by its shell. However, as lobsters release their shells frequently, it is impossible to determine their age. Physical knowledge in age leads scientists to believe that lobsters can reach the age of 100. Lobsters can grow up to 3 meters in length for the entire body.

To determine the sex of the lobster, you should look for swimmerets, small feathery appendages under the tail. The first two swimmerets near the body are bony and hard for the males and are soft and feathered in a female. Only a female has a small shield between the two legs of the movement, which is where she keeps the sperm after mating until she lays her eggs. The female also has a broad tail, which is needed to carry all her eggs.

How do lobsters’ mate

Female lobsters mate especially when they are in the form of a soft shell, just after melting. They can keep live sperm for up to two years until they decide to fertilize their eggs. A female (1 pound) will lay about 8,000 eggs. A female weighing 9 pounds may carry more than 100,000 eggs. Fresh laid eggs are about the size of a pinhead and are attached to swimmers under the mother’s tail for up to a year with something like glue. That year the larvae will molt about six times while still in the egg.

When the eggs are ready to hatch, the mother will move them out of their shell, releasing them as larvae. The larvae will float to the face for four to six weeks. At the top, they are easy prey for seabirds, fish, and other enemies. Less than 0.1% of the larvae will survive, settle down and grow like baby lobsters.

Like dolphins, lobsters use complex signals to build social relationships. Sometimes they walk hand in hand, the older ones leading the younger ones.

How lobsters hunt for food

Lobsters often hunt for food at night. They eat fish, crabs, sea urchins, mussels, snails and sea stars. Naturally, lobsters are not cannibalistic, except when caught in overcrowded conditions.

Lobsters chew their food in their stomachs, very close to their mouths, between their grinding surfaces that look like molar teeth.

The body of the lobster has 19 parts, each covered with a half shell. The shell is small and soft where the parts join, so lobsters can bend their bodies and move.

Lobsters breathe in lines found under the shell on both sides of the chest (middle part). 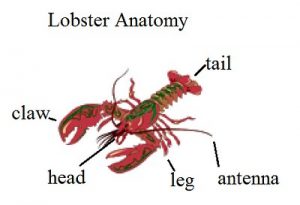 how do lobsters communicate by Evelyn Saenz is licensed under CC BY 2.0

Lobsters’ eyes are compound eyes, consisting of hundreds of lenses that are joined together at the edges of the joint organs called stalks. The four tiny horns in front of their heads are used to “smell” food or chemicals in water. Lobsters keep their horns and eyebrows constantly searching for food and looking for enemies.

Lobsters may lose their claws, legs, eyes and horns by accident or defenses, but they can recover. Lobsters often fight other lobsters to find a place. If another lobster grabs its claws, it may drop its claws to escape. Sometimes, a very aggressive lobster will tear the opponent’s claw. The lobster with the missing claw is called a cull. It takes about 3 to 4 molt cycles for the it to grow back to full size.

Lobsters have a complex sensory system that allows them to sense things that will harm them. 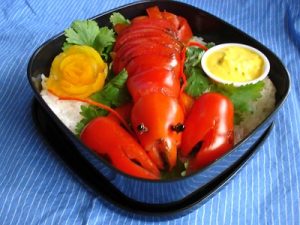 How do lobsters communicate by Sakurako Kitsa is licensed under CC BY-NC-ND 2.0

Lobsters were considered a delicacy in medieval Europe, and they served as a medicine. Rostrum, or the front part of the body, was filtered and used to help people pass kidney stones. Gastrolith, or gizzard stone used by the lobster to aid digestion, was used to treat stomach pains

By the 18th and early 19th centuries, the New England Lobster was so overcrowded that it was fed to pigs and shells used as fertilizer. There were even also laws passed for it not to be served to prisoners and slaves not more than three times a week three.

In the wild, they are mostly greenish brown. They turn red when cooked because heating dissolves the bond between pigmentation and protein in the shell. The color red comes from the expression astaxanthin, a type of carotenoid pigment found in orange-colored plants, eaten by the animals lobsters eat.

Lobsters have some unique features. Lobsters have two bellies. One is found in what we would consider a lobster head – behind its eyes. The stomach has teeth-like properties (called the millstones) that are used to digest their food. When enough food is available, it passes into another stomach. Most lobster stomachs are taken up by the digestive tract that acts as a filter – like the liver.

A lobster claws usually have two different sized pincers. The main one of these two is the crusher, and it is used to crush the shells and walls of its prey while the other smaller claw is used to cut, hold the food and scrape it into small pieces so that the smallest horns can insert it into the lobster’s mouth.

If a lobster loses its claws or leg, it will grow again when molting. Molting occurs several times a year until the lobster is fully grown. During molting the carapace disintegrates and everything solid is shed. Any lost legs come back at this point, and they are the same as the real one. The lobster can also dispose of an organ or claw if needed to save its life, such as escaping from a predator. This dynamic process is called autotomy or reflex amputation

Lobsters do not scream in pain when placed in a pot of boiling water. They don’t have vocal chords, so they literally cannot shout. The sound most people hear is the exhalation of air from their stomachs through their mouths.

They don’t fertilize their eggs immediately; they can keep live sperm after mating for up to two years. In some cases, she has not been provided with enough sperm to lay all her eggs – possibly tens of thousands of them – so she may need one or more males to perform the task. Yet her eggs may not be fertilized, because the female decides when conditions are right. She can keep live sperm in her body for two years before using it to fertilize her eggs.

After hatching, lobsters go through many stages of development. As soon as they begin t+o look like tiny lobsters, they not only move around and eat zooplankton, fish eggs, and other caterpillars. They compete for food and follow prey such as crabs, gastropods, starfish, and sea worms. Sometimes young lobsters can eat each other.

Lobsters do not age in the same way as other animals – they do not become weak or lose their ability to reproduce, and they will continue to molt and grow. However, that does not mean they live forever. Sometimes, even if they are not caught, they die because of natural causes. Often this is because they lose the energy to molt which can lead to fatal diseases.

So, we know that lobsters end up dying, but we’re not sure when. Some estimate that wild lobsters can live up to 50 years.