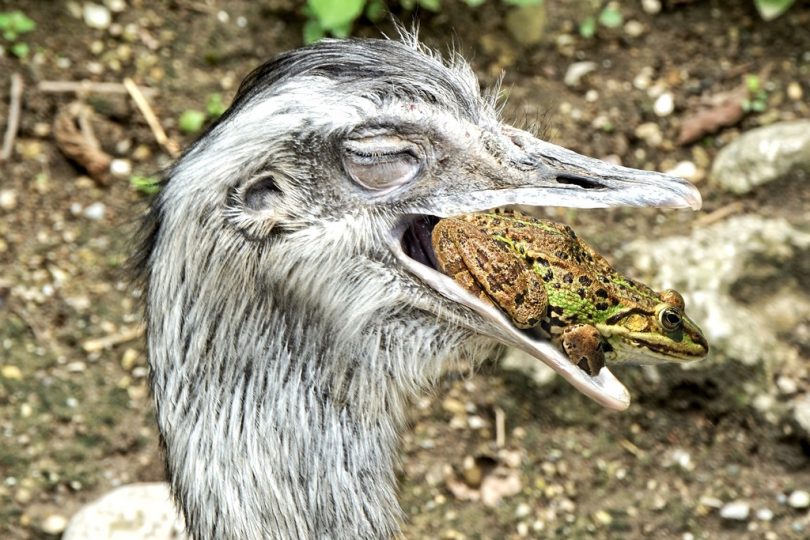 In this article, I will be sharing with you some of the animals that eats frogs or feed on frogs. One of the things I like as much as I dislike it is the croaking of frogs from potholes, gutters, ponds, and other mini water lands that only form during the rainy season, especially the night it rains.

I like the croaking of the frog because sometimes I find it very hilarious especially in the cool of the night, when tranquility is restored to the environment and the silence gives the choristers of frogs a stage with which they entertain and warm up nature in the night world. Then I dislike it when it is not cordial enough, like you have about four frogs croaking at different pitches and differently, almost like a charade. Times like that are when I really want to go out in the dark, fish the frogs out and silence them forever.

Before sharing the animals that eats frogs, I will briefly share what the frogs look like in this section. The frog is a species of amphibian, and just like the other amphibians who have no tail, the frog belongs to the Anura order.

However, the frog has a quite moist and smooth skin, and a squatting position from which it leaps to make locomotive movements. Very close to the frog is the warty, squatty, and hoppin anura, which is called the toad.

Also, the frogs are mostly identified with their very protruding eyes, their strong web bound hind feet, and of course it has no tail. So, it uses the web bound hind feet to leap, as well as swim through the ponds or gutters where it inhabits or the path it threads.

Whether it be mammals, or birds, or snakes, or even other species of amphibians, the very poisonous skin glands do not have the ability to provide the frogs with the protection that they need from any of their predators.

Furthermore, it is necessary to know that some of these anurans are edible, while some of them are not edible. So, the frogs that are edible have been discovered to have to depend solely on the adaptive feature of camouflage, with which the frogs try to hide by blending into their environment. There are also some of them who can slightly change colours just like the chameleons would but not as the chameleon would.

There are also other species of frogs that have very bright colours in their body parts beneath the surface. These bright colors flash around whenever the frog leaps in movement, or even just moves at all, which often confuses the enemy of this species of frogs, as well as distracts these predators from being able to identify this species of frog, not to talk of capturing it and having it for food. Some animal scientists postulate that this adaptive feature is actually proof that this species of frog could be very poisonous, and that its toxicity should not be underestimated or undermined.

What kind of Animals eats frogs?

Having seen how poisonous some species of frogs can be, as well as their rate of toxicity. At this juncture, it is important to know that there are animals that feed on the different species of frogs and I will be sharing these animals with you in this devotion.

There are also some other predators of the different species of frogs that do not appear to be as common as the ones that are listed in the section above. Some of these uncommon predators of the different species of frogs include the following: the owls that are barred, the hawks with raid tails, the crayfish, the opossums, the skunks, the turtles. the large diving beetles, the Eastern newts, the blue jays, the skunks and even the six-spotted fishing spiders.

More so, the species of frogs lay eggs, and the tadpoles as well as the frogs are also a source of food supply to the food chain of the ecological system, because predators like leeches as well as some big marine insects.

For more clarity, the animals that eats frogs may have to be carefully enumerated based on the different habitats of frogs where these predators may inhabit as well.

So, when the frog lays an egg, the egg in a couple of days grows into a free-swimming tadpole, and then to a frog. Now through each level of growth, the frog is prone to attack from different predators. For instance, with leopard species of frogs that dwell in the freshwater biome, almost all of its tadpoles die; like on a scale of one hundred percent, about ninety five percent of the froglets, or baby frogs die in the hands of predators at that stage of their life cycle.

The Birds and The Snakes

Some of these birds or avian predators include the hawks, geese, swans, ravens, crows, gulls, ducks, and wading birds. These big frogs are also prone to being prey to predators to swimming snakes like water moccasins, garter snakes, and other swimming snakes.

A Variety of Mammals

While it is true that many classes or species of mammals do not feed on some species of toads and frogs as a result of the foul skin secretions, not all species of frogs have a foul skin that secretes the bad taste which repels predators.

However, most of the mammals in a freshwater biome will always hunt down and prey on the frogs within their reach if they are able to catch any of those frogs.

Next on our list for animals that eats frogs are the water creatures. Some of this water predators include the following: fishes, turtles that live in water, water snakes, some species of carnivorous frogs as well.

The biological nature of frogs makes it necessary for frogs to seek out any source of water, it could be a gutter, pond, creeks, stream, anywhere it can find moist so that the skin of the frog is wet, and the frog is able to breathe.  As a result of this, a good number of frogs spend a lot of time in water. Apart from keeping wet to enable breathing, the frog also gets into water to avoid getting into the hands of its predators on the land.

These reasons which are highly plausible unfortunately sends these fresh water biome species of frogs into the hands of their aquatic predators.

In the freshwater biome, there are also small predators who take pride in feeding on tadpoles, froglets, and even frog eggs. You know how they say cut your clothe according to your cloak, these predators consider all the mini or smaller sizes of frogs, better put these small creatures consider frogs to be a good source of meal when the frogs are at the early stages of their life cycle.

Sometimes i wonder why the smaller frogs are unable to fight back because these creatures are also small themselves. However, some of these creatures include the following: leeches, large water bugs, dragonflies, newts, dragonfly larvae, diving beetles and so many other little animals that eats frogs in their early stages.

So, these creatures by feeding on  frogs also gives more importance to the frogs in the ecological system, because clearly, the frogs supply food to the food chain for both the bigger creatures and the smaller creatures.

Unfortunately, these beautiful species of frogs also supply food to the food chain in the ecological system of the rainforest. They are food for a good number of the animals that inhabit the rainforest environment.

Some of these predators include birds, kitties, and so many other animals that get attracted to these species of frogs and consider them food. Good enough, some species of frogs in the area of the rainforest are able to utilize their adaptive features which helps them escape from the claws of their predators.

The other predators that are on land or on trees include the following: monitor lizards, bullfrogs, pythons, boas, snakes, tiger salamanders, and other land amphibians too.

They fly above the ground and when they happen to sight a colorful leaping frog, with their sharp sight, they fly in that direction and they strike accurately without missing their targets most of the times.

Some of these birds include the following: the Eagles, the hawks, the hornbills, the toucans, and the owls.

In the rainforest environment, most the frogs also need the be careful of the tarantulas.

Tarantulas are large and hairy spiders, that have venoms in them which are quite poisonous when they bite. Natgeo wild records that the tarantulas usually burrow the ground and live in the ground. It is important to note that they belong to the family of arachnids.

This animal is a threat to the species of frogs in the rainforest. They always take the frog by surprise because they burrow the ground and live in the ground, so when the frog is not suspecting, they launch an attack. Gladly, the frogs who are not usually on the ground but on the trees are free from the attack of this tarantula species of spider.

And finally on our list for animals that eats frogs are the mammals. Like in everywhere else, there are mammals that live in the rainforest. Some of these mammals include sloths, ocelot, monkeys, tapirs, anteaters, and insects, there are also more mammals that are very predatory in nature, and are usually in the cat like in nature. Like the leopards, the jaguars, and the other bigger cats when they are hungry.