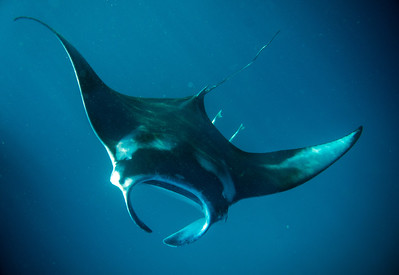 The difference between manta ray vs stingray.  They share a series of differences as well as a series of similarities, which will be briefly shared here and will be shared in the details in subsequent paragraphs or sections. So, some of the similarities of the different species of Manta ray as well the different species of stingray have flat body shapes, they also have quite wide pectoral fins with which the head of each of the species are fused.

On the other hand, one of the most obvious difference between manta ray vs stingray is the single fact that the different species of the manta rays do not have any tail or a stinger or a barb just like the stingrays.

There are a few other differences too which will be fully shared in one of the next sections. Some of these differences include the following: that species of Stingrays dwell on the ocean bottom, while the different species of manta rays find comfort in living on the surfaces of the open ocean.  More so, the mouth of the stingray is on the underside of its body and the mouth of the manta is around the front edge of its body.

Some Species of the Manta Ray 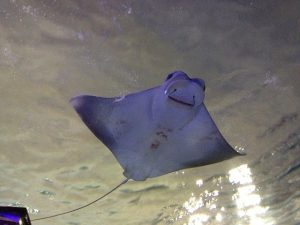 Species of Manta rays belong to a family of rays that are often referred to as devil rays, with the nominal name Mobulidae.  Like other species of the family of the rays, the devil rays also have the cephalic fins, which is also known as the head fins.

The cephalic fins or the head fins are used by the species to channel water and food into its mouth when the fins are unfurled. Sometimes, the devil rays roll up flexible appendages (the head fin or the cephalic fin) in order for it to make the fins more streamlined in shape. When the fins are furled, these fins appear to share a resemblance with the allegory of the horn of the devil, which is why this species is called the devil’s ray.

Species of manta rays are also subdivided into two other different species which are as follows: The Manta birostris and the Manta alfredi.

The species of the manta birostris have been observed to basically roam the open ocean (surface of the ocean) especially because they are migratory. More so, they are mostly seen at the offshore islands, at the oceanic seamounts, and at the submarine ridge systems.

Meanwhile, the species of manta birostris are predominantly found in the Atlantic Ocean, the Indian Ocean, and in the Pacific Ocean.  This species is usually up to twenty-two inches across in size.  While the species of the manta alfredi is a smaller species with the average size of eleven inches.

More so, the manta birostris is predominantly found near the shore, mostly around the coral reefs, and sometimes in its residential groups.

It is important to know that a manta ray is actually a type of the species of stingray that lost its stinger during evolution. As a result of the loss of the stinger, the manta ray developed many different adaptations, which includes the use of the cephalic lobes (that is the skillful flaps on the front of its face which helps the species of manta to find tiny plankton for food from the water).

Different species of manta rays are quite big in size. For instance, the Mobula birostris species is a giant oceanic manta ray species, as well as the largest ray among all the species of ray.  This specie of manta has a wingspan of about twenty-nine feet (29 feet), which is about eight point eight meters [8.8 meters]. The other Manta rays’ species can grow up to twenty feet (20 feet) which is about six meters [6 meters] looking from one wingtip to another wingtip.

Species of Manta rays have different dies and so feed differently

While feeding, the different species of manta rays have been observed to repeatedly somersault beneath the water because they feed in horizontal orientation, they are also observed to somersault occasionally just to break the surface of something.

More so, most species of the stingrays use the dentition of flat teeth to really crush the hard shells of animals. The species of Stingrays uses a specialized sense to detect the electrical impulses of any prey that is buried in the sand (this will be again explained in preceding sections). However, manta rays also use the same sense to help itself discover their plankton meal.

How do the Species of Stingrays and the species of Manta rays survive their Predators?

The species of stingrays use the stinger on their tail as defense tools for themselves especially given that they are small in size.  While the species of manta rays in the absence of a stinger at the base of a tail, they however, use the advantage of their large sizes, and their speed as their defense mechanism.  Also, the species of rays are able to hastily flee from a seeming predator, although the species of rays barely have predators.  They have only few predators naturally.

You already know that the stingray could be buried in the sand, and flows with the tide. So, if you happen to visit the beach, a place it could be, do not hide your feet in the sand so that you do not erroneously step on a stingray.

If for any reason you happen to be stung by a sting ray, make sure to quickly get medical assistance for pain relief and to also deal with any form of allergic reaction that could come with the sting. However, if the barb of the stingray broke into your body during the sting, try as much as you can to not remove it yourself, seek medical help urgently instead.

Many species of stingrays (the manta rays inclusive) usually swim alone hence the only the only time the species get to socialize with others is during the period of breeding and the period of migration. However, the seeming boring species are different when it is time to mate.

During the period of mating, the species of rays make it quite interesting with a series of socializations. Here is what they do: a group of the manta rays’ males deliberately chase a particular female manta ray for a long period of time, until only one male manta rays is left.

Species of stingrays are mostly found in the shallow part of the coastal waters of seas that are quite temperate. More so, species of the stingrays mostly sway or move in the flow of the tide, and when they are not active, they are buried in sand.

Description and Traits of the Stingray

The coloration of the different species of the stingray basically reflect the shading of the sea floor, which hides it away from bigger rays, and species of sharks that are predators by giving it an adaptive feature of camouflage. The body of the stingray is flat, and has pectoral fins that are joined to its head and to its trunk with a tail that trails behind it.

The pair of eyes of the different species of the stingray are seen on the dorsal side of the fish, while its mouth, and its nostrils, as well its gill slits are well fitted on the underbelly of the specie. According to scientists, the eyes of the stingrays do not play any vital role when the fish goes hunting.

The different species of the stingray are like the sharks, decorated with the electrical sensors identified as the ampullae of Lorenzini which is located around the stingray’s mouth; more so, these outfitted organs sense or perceive the natural electrical charges that emit from any potential prey. Many species of rays also have jaw teeth with which they are able to crush species of mollusk like the clams, the oysters, as well as the mussels.

Most species or types of the stingrays only swim by undulating their bodies just like a wave; or by having others flap their sides like wings when they are set to move, or when they are in motion.

What you should know about the species of stingrays.

There are few things you should know about the species of stingray and they include the following:

Species of stingrays are species of small rays which are cartilaginous species of fishes, and are very related to sharks.

Most of the species of stingrays have about one or more stingers that appear barbed. They are best identified as gotten from the dermal dentils that rests on their tails. Now these dermal dentils are used for self-defense. The stinger of the stingray is about thirty-five centimeters (35cm) which is about fourteen inches (14in) in its length, and the stinger has about two grooves that have glands which contain venom on its underside.

The venom of the stingray is concentrated and is stored in the integumentary sheath, where the whole stinger is fully covered with a skin layer that is thin in texture. A few species of the stingrays that belong to the members of the Myliobatoidei suborders, do not have stingers, just like in the case of the Manta rays as well as the porcupine rays.

Different species of the Stingrays live in a variety of waters all over the world, including the subtropical, the tropical, as well as the temperate waters. Although a few species could sometimes be seen in various locations of the freshwater.

Most of the Myliobatoids or Stingrays are considered to be demersal because they live in the bottom part within the water column. Even though some of the species like the eagle rays and the pelagic stingray, are not bottom dwellers, and so are pelagic.

More so, there are about two hundred and twenty (220) discovered species of the stingrays which are properly grouped into ten families and twenty-nine genera

Different species of stingray are increasingly vulnerable and are really being threatened to extinction as a result of little or no regulation guiding the art and the business of fishing.

Some similarities between Manta Ray vs Stingray

In this section we will share with you very briefly some of the similarities  stingray vs the manta ray. Some of these similarities include the following:

Some of the differences between the Manta Ray vs Stingray?

In this section we will share with you very briefly some of the differences stingray vs the manta ray. Some of these differences include the following:

Stingrays live in waters with warm temperature, and some of its species live in the freshwater. Species of manta rays predominantly live in subtropical and tropical salt waters.

Location of the Mouth

The size of the manta rays is large; they are also very wide but are not as long as their width. On the other hand, the stingray is smaller in size and it is also longer in its length than it is in its width.

Position in the column of water

Still in the line of differences, the manta rays have a pair of cephalic fins that look like horns on their head, on the contrary the stingrays do not have cephalic rays, they only have round heads.

Manta rays are regular visitors of cleaning stations because the manta rays like to clean up their gills, so that the parasites in there are removed by the species of fishes that are cleaner. On the other hand, most stingrays do not find the need to visit cleaning stations neither do they like to have their gills cleaned up.

There you have it, our differences and similarities between the manta ray vs stingray.