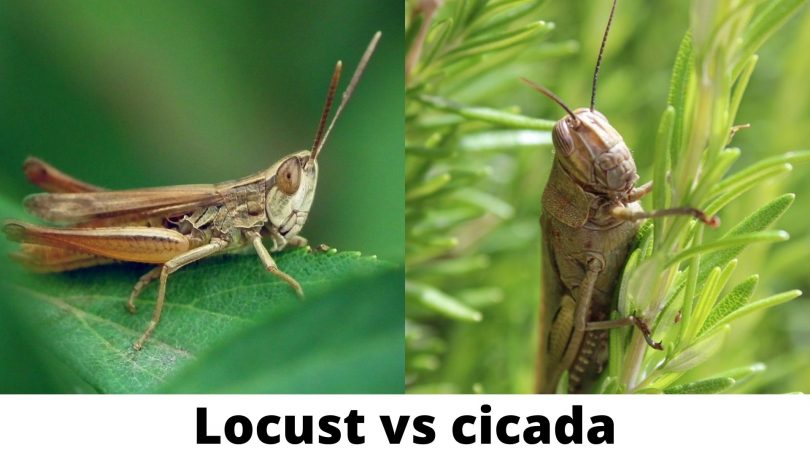 Usually, a swarm of locusts happens when the area or habitat has the appropriate climatic conditions, the abundant supply of food, and also a huge spurt in the population of the species of the locust. When the species of locust invade or inhabit a place as a swarm, the gland called serotonin which is secreted by these species of insects encourages and even makes these groups act as though they are one entity.

The species of the insects’ locust

The species locust is a species of insect that belongs to the Orthoptera order. Species of locust are known to be solitary insects as they like to live through their life cycle alone; however, should the wet days come, the species of locust forget about their solitary nature and begin to come together in various groups till they have formed very formidable colonies as though they are going for battle.

They form colonies that if you were seeing or learning about the species of locust for the first time, you will find it hard to believe that they have a solitary nature.

Despite looking like a host of soldiers, the species of locust are not in any way dangerous to human beings especially because they do not bite humans, neither do they have any diseases to transfer to humans. Locusts are unfortunately very brutal to plants; that is the only they are dangerous to man, destroying plants and farms. Species of locust could actually destroy a farm or any green environment or matter in a very short time especially when they are in their colonies. After destroying a farm land, the colonies of species of locus exit the farm or the green matter together in their colonies to search for another environment with green matter where they can create their swarm and destroy the helpless crops and plants in the area.

Appearance of the Locust

The locust’s species is a type of grasshoppers that has horns that are short, and like the various species of crickets and a variety of insects, the locusts’ species are arthropods, that belong to the orthoptera order, and belong in the acrididae family of insects.

However, most species of insects are easily and basically identified by the length of their hind legs, which is their spring board for jump and basically taking great hops or lifting their bodies; that is exactly the case for the species of locust.

More so, the species of locust like other species of insects have bodies that are thin, and usually grows to about three inches in length, albeit the locust has a pair of wings that are short when compared to the bodies of the locusts.

Because they have a body that is longer than its single pair of wings, the locust is unable to fly high which is why locusts are seen hoping or jumping most of the time; this is also applicable to a variety of insects. Again, species of locusts come in a variety of colours that ranges through the sand brown and the bright green.

The Reproduction and Life Cycle of Locust Species

After the male locust species mate with the female locust species which then lays its eggs within the soil, then the when it is the season of spring, the nymphs of the locust begin to hatch. The nymph goes through a cycle of a variety of molts, before it finally matures to be an adult locust. The species of locust can have a cycle of various generations within the time space or frame of one year.

The life cycle of most species of locust lasts for only about one year, and this takes place in just three stages. The three stages include the following:

Adult female locusts’ species usually burrows (digs up) a hole in the soil where its lays a cluster of eggs that are between twenty to thirty eggs (20 – 30 eggs), this cluster of eggs is usually covered in a froth so that the eggs are protected from predators and also are preserved from diseases.

So within the time frame of about two weeks, the nymphs of the locust hatch. The nymphs come out looking like mini adults (that is actually what they are!) and then they go through a series of molting processes, in which species of locusts sheds their skins. It is also after the period of each molting that a pair of wings begins to grow with the body of the locust.

The growth continues until the size of the locust reaches its adult size. Then as an adult, it takes the species of locust a few weeks to mature sexually enough to begin a new generation and a new cycle. After the adult is sexually mature, the adult begins to lays eggs once the external conditions needed to fertilize the eggs are sufficient and complete, the adult female locust lays its cluster of eggs and a new cycle begins

The Behaviour of the Locust Species 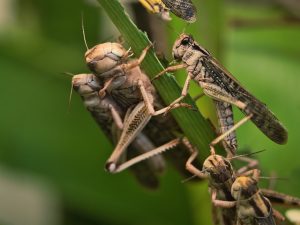 Remember we established that the locusts are solitary insects and as such like to be alone, we also established in the introductory section that the species of locusts’ form colonies when the soil is wet.

This implies that the locust has a dual behaviour which are dependent on factors that are outside its own body, like when there is plenty of food or lots of green matter, and when there is a change in the climate.

On the contrary, when the species of locusts become gregarious or change from the solitary mode to the mode of colonies, the locusts come in groups till they become colonies and form huge swarms that could be up to millions should a census be taken.

It is on these level that the species of locusts are aggressive and very dangerous to plants, crops, and to the green environment and green matter in general. When there is an outbreak of swarms of locust in an environment, or in an ecological system, the environment is usually stripped of its entire vegetation and sadly there is barely much that can be done to salvage the situation until it is done with its destruction or until the season when the soil is wet is over, and it disintegrates its colonies.

The species of insects’ Cicada

Just like the plant lice, and other insects, the various species of cicadas are arthropods that belong to the hemiptera order, and belong to the cicadidae family.

More so, the various species of the cicada insects come in two different forms or different classes which include the following:

The Magicicada species, and the Annual species.

For the magicicada species, their life cycle runs for a period of thirteen to seventeen years (13 – 17 years).

While for the annual species, their life cycle runs for a period of three years (3 years).

The Appearance of the Cicada 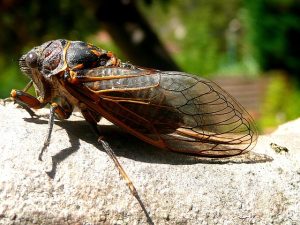 Also, most species of the cicada have a pair of wings that is quite transparent and has veins that are quite pronounced; in addition to that, its pair of wings is also longer the its body which makes easy for it fly high.

The Reproduction and the Life Cycle of the Species of Cicada

The adult female cicada lays more than one hundred eggs, and it does not put all of them in one part of the branch of the tree or the nourished plant. Instead, the adult female cicada scatters the eggs throughout the parts of the tree, it scatters some in the stems, in the twigs, in the branches, where the eggs are safe enough for the nymph to hatch and get nourished for a while.

Within a period of time or a time frame of about one month, the over one hundred eggs of the adult female cicada begin to hatch into small nymphs, it is however these nymphs that burrow (dig up holes) into the soil or the ground and then these nymphs begin to feed on the healthy roots of that plant until the stage of nymph is over and they have attained complete maturity to adult hood.

After the nymph of the species of the cicada matures to adult hood, the adult cicada begins to molt and while in the process of molting it starts to shed its skin, it continues to shed its skin until the adult cicada species develops into a full winged adult. The adults depending of the species for live about two months, during which they mate, gestate, find healthy plants to lay over one hundred eggs in, a new cycle begins and they die.

The Behavior of the Cicadas

This is because one adult nymph is a capable of laying more than one hundred eggs within a single gestation, now when the short gestation period is over, the species of adult cicadas just lay eggs inside the plants.

If it is in the period when the magicicada species fly in their colony and lay eggs, imagine the damage they bring to a plant or a farm of crops. When the eggs and the nymphs start to feed on the various parts of the tree, nothing will be left of the crops. So while the adult cicadas are not aggressive but are the passive cause of the problem, the various species of cicadas are aggressive from their conception.

More so, the various species of the cicadas are one of the nosiest species of insects on the planet, the male and female various species of adult cicada sing in different patterns and in various tones to attract mates to themselves. If you are in the same area as them, they are at about one hundred and twenty decibels close enough to lead to a human being’s ear damage.

Even the noisy sound of their singing can be heard from a distance especially, because they sing in colonies. However, apart from the noise that comes with the singing and the fact that the singing is a mechanism implored to attract mates, the loud and noisy singing of the birds drives birds that are predators to the farm and crops away from the crops.

Similarities and Differences between Locust and Cicada

We have outlined few details of the locust and cicada, we will briefly share some of their similarities and differences in the following sections.

Some of the differences include the following:

And a few similarities are: