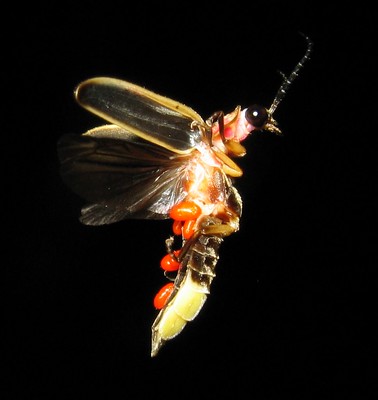 I often wondered how fireflies or lightning bugs light up, did they have any electrical appliance in them? What fuels their light? Today I have answers to these questions, and in this articles, I will be sharing with you all you need to know about how fireflies light up.

Growing up, if I happened to stay out at night, or stroll with my siblings, I always saw fireflies around a particular vegetation within the environment. I would run in their directions, grab one slow flying creatures in my palms, then I will peep through the vertex my left thumb and my right thumb has formed, after which I go on to let the light emitting insect fly away, and I make a run for another firefly.

A Brief Description of Fireflies

The ability of the fireflies to light up themselves is amazing and it is something that has to do with its design. The species of fireflies are also known as the Lightning Bugs, although so many people refer to it as lightning bugs where as some most entomologist insist the accurate name for this species of insects should be the lightning beetles, not fireflies nor lightning bugs, because for the entomologists, these species are not bugs, neither are they flies.

So if we are to go with assertions of the entomologists, it will be safe to say that the species of fireflies, are the species of beetles that have wings.

In length, the adult fireflies are usually between seven upon sixteen inches to nine upon sixteen inches long. (7/16 to 9/16 inch long). More so the species of fireflies are also known for the pronotum which usually extends itself above the head of the insect. It has a very soft body that is quite elongated with the pronotum slightly covering the head.

Also, the colour of the pronotum is red with a blend of yellow, and it has a black spot in its center. While the wings a brown with shades of black, and the cover of wings also have a very light yellow colour that covers the wings and body except for the front part of the insect.

The male firefly on its abdomen has a luminous that is yellow in colour with a blend of green, while the female firefly has a splotch that is quite small. The luminous and the splotch are the segments from where the living light is produced. They are both identified as “taillight”.  However, the eggs secreted in the land also have the ability of showing a few touches of luminescence.

The species of fireflies are beneficial insects. These insects do not bite, they do not have pincers, they do not attack, they do not carry disease, they are not poisonous, they don’t even fly very fast.

How fireflies light up

Fireflies or the lightning bugs produce a chemical reaction that allows them to light up themselves within their bodies. This method of producing light production is called bioluminescence.

I know this is not a physics class but since light is involved, I will have to really tell how it works because this is the most crucial part of the fire flies, and this is the crux of this article. So this is how it happens.

The oxygen gets combined with calcium, with adenosine triphosphate (ATP) as well as with the chemical called luciferin, and in the presence of the luciferase which is a bioluminescent enzyme responsible for light stimulation, the compound or the combination gets to work, and boom, light is produced.

The light from the lightning bug is a cold light as it does not lose energy as heat. This also explains why the various species of the fireflies or lightning bugs survive lightning up the environment at night.

You may be wondering why the oxygen goes out from the Insects, it is because the species of fireflies do not have lungs, generally, insects do not have any organ of lungs in them so they are not able really retain oxygen. However, in the body of insects including the fireflies or the lightning bug, elements of oxygen are transported from the exterior part of the body, to the interior cells in the body, through a complex series of very small tubes that are known as the tracheales.

Good thing is the science has an explanation for this. There is an element called the nitric oxide gas, which is the same gas produced when one takes the drug called Viagra, this element is said to play a crucial role in the control of the high rate of light flashes by the species of firefly flash.

This is to say that whenever the firefly is not emitting light, it means that the element nitric oxide is not produced; which also implies that at that moment, oxygen which gets into the body and eventually the light organ usually just gets transported to the organelles which is the surface of the cell that produces energy, and is called the mitochondria, and so the oxygen is not present to be transported through to the light organ.

However, the presence of the element nitric oxide, is what binds the mitochondria, which then aids the transportation of oxygen to the organ of light where the oxygen combines with all of the other chemicals already mentioned as necessary for producing a bioluminescent reaction.

Unfortunately, the nitric oxide element breaks down very quickly, and so once the required chemical is not being produced, the molecules of oxygen get trapped by the mitochondria and become unavailable for the production of light by the fireflies.

More so, the species of fireflies or lightning bugs appear to light up for a whole lot of other of reasons.

Why do fireflies light up

However, a variety of studies have proved that the female fireflies choose their mates based on the features of a particular male’s pattern of flash. So, the higher the rate of the flash a species male flash is, and the higher the intensity of the flash is, the more attractive the male species of fireflies are the more chances that the particular male firefly with the higher rate of light and higher intensity will be chosen by the female species instead of its counterpart.

In the same vein, some species of the adult fireflies do not emit any light at all. They however use pheromones to locate their mates. It is important to know that the use of pheromones as signals for sexual relations are basically a series of an ancestral condition of the fireflies, in which the various species of fireflies use the pheromones to attract their mates, while the use of the luminous light for sexual signals is a product of evolution or development in the various species of fireflies or lightning bugs.

Again, the larvae of the species of fireflies produce glows that are short, and are more active by night, although many of the species of the firefly are semi-aquatic or subterranean. The species of fireflies often produce steroids that are defensive in the body of the various species of the firefly which makes it difficult for their predators to harm them. In addition to that, the larvae also use their light glows to warn against distastefulness or to warn against something that they do not like.

Facts about the fireflies

Various species of fireflies are considered to be efficiency superstars. Here is why.

The species of fireflies are insects that have organs of light which are located under the position of their abdomens. It is true that more than two thousand species (2,000 species) are all associated with the name “firefly,” not all of the insects identified as species of fireflies really do glow. The species that do not mix oxygen with the organ of light, will not be able to produce light. And does who do like we earlier described produce light.

More so, the fireflies use their blinking lights to scare predators to retreat. We have earlier on indicated that the blood of the species of the firefly contains a very defensive steroid which is called the lucibufagins, so this steroid is what actually makes them distasteful to a whole lot of predators because once species of predators get a bite, they associate that particular unpleasant taste with the light of the species of firefly so they keep off from any attempt to attack the various species of lightning bugs in the future.

Humans do contribute to the decline of fireflies in an ecological system through the growing outrageous habit of felling trees, destroying vegetation, not taking care of the environment, light pollution, burning of the vegetation and a few other activities that can destroy the various species of fireflies and scare them away from a habitat they are used to, to an entire different habitat. Do not be puzzled by this fact, because this is really a fact of the various species of fireflies.