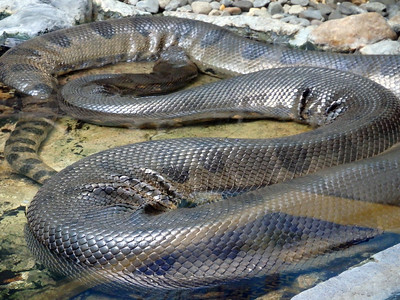 Species of anacondas are semi aquatic snakes that are mostly found in the tropical areas and places like South America. The anaconda is basically the heaviest species of snake in existence with a great ability to swim that so many other species of snake do not have. However, this aquatic reptile belongs to the genus of eunectes, that is a genus of boa which in Greek etymologically means good swimmer.

These species can be easily identified by their geographic range, their sizes, and their genetic makeup.  Actually, when most people talk about the anaconda, it is the green anaconda that is being referred to.

Also, the species of anaconda play very significant roles in the myths of the people of South American where they are said to have appeared to be taken different shapes just like shape shifters, they are also considered as the maker of water, as very vicious human eaters, and they are also regarded to be magical as well as spiritual beings with great healing abilities.

There are records of Anacondas having being about one hundred feet, which is about thirty meters. This record has not been verified by science, but chances are that they might be true, given that the scientific fiction movies display that, and if they do then it increases the chances that the movies although fiction were in some way informed involved by a reality.

Like we established earlier, to share the details of the size of the anaconda, it is necessary that we look at it through the different species of the anaconda. However, before we proceed into that, it is important to have a general idea of the general physical descriptions of the different species of anacondas because despite their differences, they have a few things in common which we will be sharing.

Anacondas have a very thick stripe that runs from its eye through its jaw; and the colour of this thick stripe is black. The species of anaconda have very smooth scales that are small, but grows bigger towards the posterior part of their bodies. More so, the skin of the different species of anaconda has a reputation of being soft as well as loose, that it has the ability to absorb a lot of water.

Different species of the anaconda and their sizes

More so, the different species of anaconda has a spot that takes the shape of an egg, and is on the middle of the posterior back of its body; this spot is either brown in colour or black in colour as the case may be. Also, the sides of the various species of anaconda are sometimes yellow in colour instead of green which has given it its name. it also has spots that have taken the shape of egg with yellow at its center.

More so, a dead anaconda could be stretched out at length, an anaconda looks bigger than the others when it has just fed than the one that is yet to feed.  Again, people who have seen the green species of anaconda have the tendencies to exaggerate what they have seen as a result of fear.  So, since anacondas stretches even at its death, the historical samples may not be accurate, and since the anaconda is bigger when it has fed, it really will not be easy to get its size.

National geographic has stated that the longest verified length of the green species of the anaconda is about thirty feet, which is about nine meters. The Guinness book of world records says the longest snake which is a regulated python is about twenty-five feet, or seven point six meters. This conflict in reports makes it difficult to reach a conclusion regarding the size of the green anaconda.

However, there is a range  that can be derived from the different records. Because we are concerned with giving you the right information it is safe to say that the size of the green species of the anaconda ranges from about fifteen feet to about thirty feet. That is to say that the minimum length of the green species of the anaconda is fifteen feet, and a maximum of thirty feet for the female. While that of the male is between nine feet and twenty-five feet.

Generally, the different species of anacondas inhabit South America, the east of the Andes. However, the green species of anacondas are predominant in the following areas: Bolivia, Brazilian Amazon basin, Colombia, Ecuador, the Orinoco basin, the Guianas, Peru, Trinidad and Venezuela.

The beni or bolivian species of anaconda is mostly found in a part of bolivia.

The dark-spotted species of anaconda predominantly inhabits Brazil as well as the French Guiana.

Behavioral Habits of The Species of Anaconda

Judging from the threat that the different species of the large snake the anacondas pose, they are prone to being endangered. However, the anaconda species are not in any way or place endangered.

This is basically because humans avoid it other humans often kill it at sight as a result of the fear of human ingestion (the fear of being swallowed by the large snakes that is the anaconda). On the contrary, some animal scientists are saying that human ingestions are not necessarily going to happen because humans do not share a territory with the large snakes, and that humans have no need to kill any species of the anaconda.

The only possible threat that can endanger the lives of the different species of the large snakes anaconda, is the loss of their homes, territory, or habitats to deforestation. This is because there is an increase in the felling of trees and forests.

Do Anacondas feed on humans?

Whether the different species of anacondas feed on humans or not is not fully open to controversy because there are myths that anacondas fed on humans. This gives them the status of legendary human eaters.

However, it is agreed that the species of anacondas precisely the green species of the anaconda feed on animals that are way bigger and stronger than humans, so chances are that it could also ingest humans.

Feeding Habits and Diet of the Species of Anaconda

The species of anacondas, just like other boas, do not have any venom and are strong constrictors. As a nocturnal the anaconda hunts for its preys by night; the anacondas usually lay low in the rivers by the banks, where they appear to be hiding in wait for an unsuspecting prey.

As soon as a prey appears, the anaconda attacks with their sharp curved teeth and apply the technique of constrictive killing. The constrictive killing method is the method of squeezing the prey till it loses its breathe as a result of no blood flow in its system.

So, the prey dies of ischemia because there is no flow of blood to the brain. Because this killing happens mostly in water, the preys also die from drowning.

As soon as the prey is assumed or perceived dead, the species of anacondas swallow it without dissecting. The large snakes have a quite huge, ligament that is unfused and is on each side of its mandibles, as well as its mobile joints in its jaws which helps them open up their jaws as wide as it is needed for him to swallow up his prey.

Also, anacondas have a stretchy body that makes it easier for them to swallow their prey and enjoy their dinner. More so, the different species of anacondas do not feed for up to a month once they have eating.

However, they are usually on the top of the food chain in their ecology system because in a bid to kill bigger preys like deer and jaguar, they often get really injured that they sometimes get to die and are food for the other living animals. It is important to know that sometimes the female anacondas swallow the male anacondas.

When it is spring time, the female species of anaconda often leaves a trail of scent or even emits an airborne chemical in order to attract the males to themselves. While the female anacondas stay in a place, the males travel the distance to come and meet them and they pick scents by sticking out their tongues.

However, when the different species of anaconda are ready to mate, they do so in the water or near the water. They form some breeding balls, and a very huge snake swarms that has a group of male anacondas wrestling for a chance to mate with the female specie of anaconda.

Anacondas are members of the aquatic family that belong to the boa family. As members of the boa family, the different species of the anaconda give live birth. The embryos are attached to a sac of yolk and are surrounded by a membrane and when it is time for the baby anacondas to be born, they break through the membrane and once they are born, after pushing through the cloaca. However, ones they are born the adult anaconda does not care about them especially because they are usually born with instincts that help them to survive.

Female anacondas for a period of lifetime have about twenty-nine babies, while the smaller ones do not have up to that number of babies.