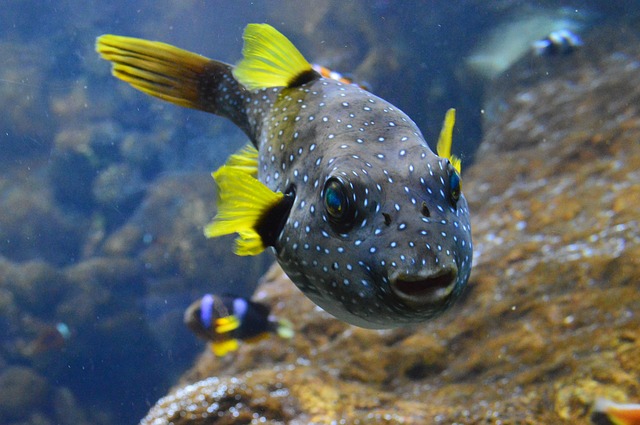 Freshwater pufferfish are becoming more popular. The hobbyists (aquarists) choose them because they are very intelligent, cute, incredibly active and very interesting fish. But one of the problems why most aquarists avoid keeping them despite their fine looks is because they are very temperamental and aggressive.

They all belong to the family Tetraodontidae meaning “four toothed,” representing the four teeth fused together in the fish’s mouth which is covered by lips.  Other members of this family include balloonfish (spiny porcupinefish), swellfish, blowfish, sea squab, bubblefish, globefish, swellfish, honey toads, sugar toads, and toadfish.

The puffer fish can be found living in tropical waters such as the Pacific Ocean and they mostly live on reefs and on sand flats.

They have the ability to inflate (puff up) their bodies after ingesting (gulping) water so as to scare their predators to avoid being swallowed, which is how they got their name – Pufferfish.

Puffers can be extremely aggressive and territorial even though they are gorgeous. They are best kept in a single specimen tank and not in community aquatic tanks, due to their care demands, special feeding requirements and aggressiveness.

Also, puffers are very poisonous due to the presence of a toxin called tetrodotoxin. But this doesn’t prevent the Chinese and Japanese from taking puffer fish as a special delicacy called fugu.

This article will not only teach you everything you need to know about choosing and keeping freshwater pufferfish  but will also enlighten you on the best ways to take care of them.

Freshwater pufferfish are characterized by a long, tapered body. They are short, stout, and have a chubby appearance.

They possess large eyes for good eyesight aiding them in the detection of food, water, shelter, even predators.

They are chubby looking (bloatly shaped) and they even seem to get bigger when they want to escape from their predators. When they gulp water, this makes them larger and prevents them from being swallowed.

They can either be discretely or brightly colored. The body coloration is affected by the amount of toxin produced by the fish. That is to say, the more the toxins, the brighter the colour of the fish.

Puffers have different shapes and sizes ranging from the dwarf or pygmy pufferfish (Carinotetraodon travancoricus) to the largest in size which is, the Mbu freshwater pufferfish. In other words, their sizes are from 1-24 inches.

They are scaleless, having thick rough skins. The absence of scales makes them much sensitive to water variations making them exposed to diseases. This is because they lack the first line of defence which are the scales.

Some species have spikes on their skins which provide them with protection. In some species, the spikes are visible while in some, it is either thin or invisible The skin below their stomach is the most elastic part and it puffs up when it ingests water.

They have four teeth that keep growing throughout their lives; two upper teeth and two lower teeth, fused together into  a tough, beak-like form. They use the teeth for opening clams, mussels, and shellfish that form part of their diet.

Freshwater pufferfish come from different parts of the world but they are mostly seen in South East Asia, in some parts of India, Bangladesh, South America and African rivers such as the Nile, Niger, Congo and others. Their natural habitat, riverbanks, is characterized by excessive foliage (forest).

Freshwater pufferfish come from all over the world, but they tend to hail from very warm water. These puffers live in tropical and temperate climates such as rivers and lakes, for example the Gold-ringed or Mbu puffer fish in Lake Tanganyika. They can also be found living in marine, brackish as well as in the freshwater habitats.

Brackish water puffer fish can be adapted to freshwater but this exposes them to diseases as they are very susceptible to ectoparasites. The most common ectoparasites are known as Oodinium sp., Ichthyobodo sp., Chilodonella sp. and Trichodina sp. The most common of these is Ichthyophthirius multifiliis which causes Ich disease. 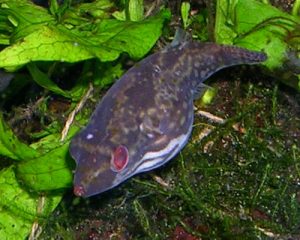 They are about 2-3 inches. They are characterized by brilliant red eyes.They are very aggressive even to their own kind and to every other fish as well thus, making it a little more difficult to maintain them. They feed on mollusks, shrimp, and snails. They thrive best in pH of 6.0-8.0 and temperature of 77-80° F. 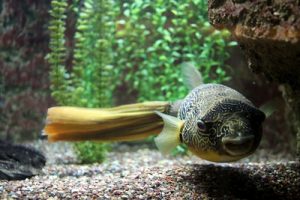 Congo puffers are ambush predators and they are found in the rivers of Africa and hence, their name. They are known by their habit of burying themselves in the sand at the bottom of the aquarium in a bid to hide from their predators. They can change their color to match the substrate. They feed on pond snails, crustaceans, large ramshorn snails, shrimps, Malaysian trumpet snails, and bloodworms. They can be grown in aquariums between 30 and 40 gallons with pH  6.5-7.5 and temperature of 74-80° F.

It can only grow to 2 inches. They prefer slightly acidic water and aquariums with live vegetation. The males are different from the females based on their colour and size. In color, the male fish have dark brown coloured bodies. And in size, they are larger. But similarly, they both have red eyes and red tail fins. The recommended minimum size for the tank is 10 gallons. 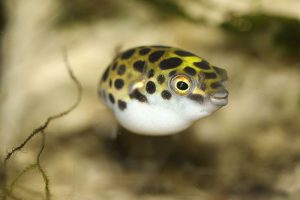 They are also known as the Dwarf Malabar Puffer. They are very tiny in size but they still require an aquarium with at least 10 gallons of water. The male puffers have brighter colors than the females. .

These can otherwise be called Dwarf puffer, Dwarf Indian Puffer, BB puffer or Pygmy Puffer. It is one of the smallest pufferfish in the world with its size about 1 inch. The male fish is different from their female counterparts based on their difference in coloration. They are both brown with darker brown splotches but the male fish have neon green wrinkles around their eyes which is absent in the female fish. They grow best under pH of 6.5-7.5 and temperature of 77-80°F. The required minimum aquarium size is 10 gallons.

This can also be called figure 8 pufferfish. These names are gotten from the visible spots on the back of the pufferfish that resemble two eyes or an 8. They are relatively small fish with a size of 3 inches and should be fed with foods such as shrimp, clams, and other mollusks. They are discovered to grow better at a pH of  6.5-7.5 and a temperature of 75-79° F.

They are found inhabiting the rivers and streams of South Asia. They are very peaceful and non-aggressive. 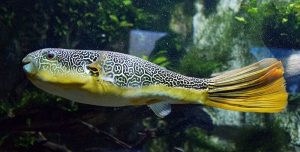 Their size is between 24-30 inches thus, the minimum aquarium tank size should be 500 gallons. They tend to grow at a  pH of 6.0-8.0 and temperature of 76-80° F.  They feed on mollusks, shrimp, crayfish, and snails. They can be housed with other fish. 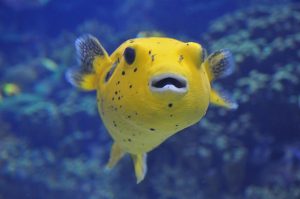 Smaller species of these fish are omnivores and can feed on certain diets that include Aqueon Tropical Flakes, Spirulina Flakes, Tropical Granules, Algae Rounds, and Shrimp Pellets. While the larger species can be fed with monster fish medley and frozen foods.

They can also thrive on frozen foods as well as treats to improve their growth and their color.

They can also be predators as they feed on a variety of snails, shellfish, bloodworms, crustaceans and other fish.

Depending on the size of the puffer fish, they require 3 (three) different feeding habits and they are:

The tank needs to maintain certain requirements or parameters in order to provide an optimum condition necessary for the fish to thrive in. Puffers can live up to 10 years in an aquarium if well cared for. These parameters include:

The aquarium should be well decorated with caves, and overhangs. The function of the overhangs is to provide shelter for the fish. Example of live plants that can be used are Hornwort, Anubias, Java Moss, Amazon Sword, Christmas Moss etc

The aquarist should make sure that a 10% water change  or 25% water change is done every week or every 2 weeks respectively using either an Aqueon Aquarium Water Changer  or Siphon Vacuum Gravel Cleaner.

They also do best between 74° and 78° F. If freshwater pufferfish happen to be grown in an aquarium kept in a  room temperature below 74° F (The normal temp.) an Aqueon Aquarium Heater should be used to maintain the temperature. Other water parameters such as water hardness and currents depend strictly on the specific species and their respective naturals habitats.

Most freshwater pufferfish such as Congo puffer prefer a sand substrate. Addition of rocks helps them feel more secure.

Puffers are known as ferocious predators. They are classified based on their hunting skills.

They swim over rocky, sandy substrate, plants or oyster beds looking for prey such as clams,blue crab, mussels, shrimp, small crustaceans or snails. Examples of such puffers are The Golden Puffer and the South American puffer.

These ones dig themselves into the sand waiting for their prey and then lunge upward and feed on them such as the Congo puffer.

These ones are found in overgrown riverbanks with plenty of hiding places such as The crested puffer fish, the dwarf puffer and the red-tailed dwarf puffer.

Freshwater pufferfish are known as fin nippers. Some are aggressive and/or predatory such as the species of Auriglobus and Chonerhinos.

Some species, like Dwarf, and Golden Puffers, can be kept with fast-moving fish like danios. Others, such as Mbu Puffers, must be kept alone. They are very aggressive so they are not made for a community aquarium tank.

There are certain ways the aquarist can take care of his or her fish. They include the following:

There are different species of puffers to chose from, each with their characteristics. So make sure to do a proper research before keeping any. Freshwater pufferfish can be very rewarding if you’re able to maintain the proper environment and correct parameters for them.

Due to the fact that they are highly susceptible to diseases, that is the more reason why you as the aquacist need to provide a very good environment for your fish.

These fish are highly recommended for experienced aquarists because of their special feeding needs and their sensitivity to water conditions. Even though they are quite aggressive, they tend to recognize their companion with time.