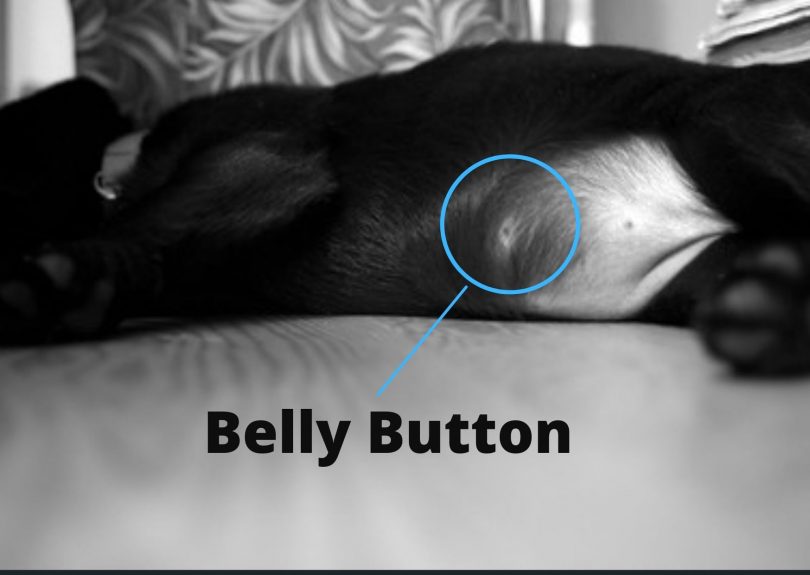 Unlike humans, our belly button is a visible reminder of our arrival to this world. But in dogs their belly button is not as prominent as it is for humans, theirs is covered with fur as they grow.

Every time we spend tummy rubs to our dogs, most pet owners will not see their dog or cat’s navel unless they know exactly what they are looking for.

Most large and small mammals – from the small Etruscan shrew to the blue whale – have this distinct scar, even if we can’t see it.

Do Dogs Have belly button?

Each puppy has its own umbilical cord that connects the mother’s placenta to the puppy’s belly. After giving birth, the mother’s dog chews the cord, leaving a wound where the puppy is connected. The puppy’s small wound quickly heals into a thin, line – also known as the navel or belly button. Therefore, belly buttons are just scars.

Most mammals have belly buttons, including dogs, cats, dolphins and humans – but there are a few exceptions.

All mammals except (Monotremes (egg-laying animals such as platypus) and marsupials (mammals such as kangaroos) are the only mammals without belly button. The marsupial umbilical cord falls into the mother’s uterus, so the scar never forms while for the platypus, they lay eggs so there is no umbilical cord present or ever formed.

What if my dog’s belly button is really visible?

If your dog’s belly button is very visible, it may be herniated. A hernia is when something that should be secured properly on the body bulges out. This can happen if the wound from the umbilical cord does not heal properly. Usually, muscles form around the area where the navel was connected.

Although, it doesn’t really call for a serious concern for your dog, some hernias can subside on its own. However, you will not get it unless you take your dog to see a veterinarian, so it is important to make an appointment. If your puppy’s belly button needs medical attention, your vet can have it repaired surgically.

While they can occur in any breed, some breeds of dogs are genetically engineered to develop umbilical hernias, either complex or not. These breeds include; Airedale Terriers, Basenjis, Beagles, and Pekingese, always monitor their newborns and puppies for the first few months of when they are born, just to be safe.

Why Do Dogs Have Belly Buttons?

Why Don’t We See a Dog belly Button?

Human umbilical cords are prominent unlike our pet’s furry bellies they may seem absent, theirs is covered with fur as they grow.

If you see an ‘outie ’in a puppy, it is considered an even hernia, if it is small and there are no internal organs stuck in it, in most cases then it is a hernia.