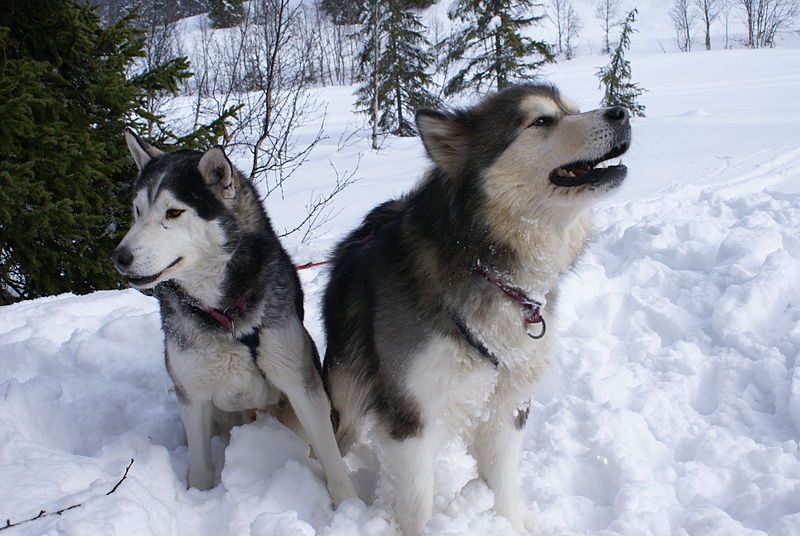 From the topic of this article, it is easy to decipher that the focus of this article is to expressly share the details needed to be known about the Alaskan malamute breed of dog vs the husky breed of dog. So, if you have been looking at breeding any of the following dogs or similar dogs like the ones that have been mentioned in the first paragraph of this section.

Breeders believe that the Alaskan malamute species of dog love to snuggle with human beings (their owners precisely) especially after they retire for the day. Another interesting feature of the Alaska Malamute breed of dogs are team players which is why they belong to the category of pack animals; however, every team has a team leader and so does the packs. The Alaskan Malamute requires proper training especially while it is young so that it is able to follow in line with the pack leader which is the owner.

SOME AMAZING FACTS ABOUT THE ALASKAN MALAMUTE BREED OF DOG

If the dog is carrying a backpack, you could take it hiking. If the dog is pulling a bike especially when someone is on the bike, you could take it bike joring because that is what the exercise is about. You could also go skate joring with Alaskan malamute pulling someone on the skate. Apart from agility classes, the dog can exercise by pulling someone on a cart, on skis, and even on a sled. Alaskan is a social breed and will always appreciate space.

As established in one of the preceding paragraphs, Alaskan requires a strong leader. Also, basic obedient trainings can always put Alaskan malamute on check.

Alaskan malamute belongs to a pack, so the sense of belonging to a pack makes it easier for it to fit in with family which is why it loves to spend enough time with its family. They also enjoys spending time with children as well; however, ensure to supervise the relationship between the Alaskan Malamute and the children.

This breed of dog does not like anything close to heat or the hot temperature which is also why the breed drinks a lot of water and mostly exercise when it is not hot. So, if you live in an environment where the temperature is quite hot, do not get or keep an Alaskan Malamute there.

The Alaskan Malamute breed of dog has a very thick fur which explains why it has no tolerance for heat. However, the Alaskan Malamute breed of dog sheds this oily and wooly fur twice a year. It is important to know that during the shedding season, that you the breeder have a vacuum cleaner and always be ready to clean because there will be lots of clump of furs lying around different corners of the house.

Alaskan Malamute loves to hunt preys, as well as chase after smaller animals like rabbits, cats, squirrels, and other small animals. However, Alaskan Malamute gets along very well with cats if the breed was raised with cats from its period of puppyhood. 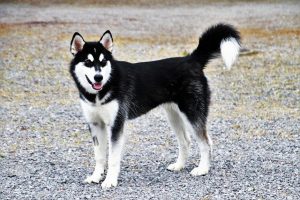 Regardless of the already created long list of the breeds of husky dog, there are still more of them which we will not dwell on in this section any more, as the emphasis of this article is on sharing details about the Alaskan malamute breed of dog and the husky breed of dog, which is more like a comparison of the two.

SOME AMAZING FACTS ABOUT THE HUSKY BREED OF DOGS

In this section we will be sharing some amazing facts about the husky breed of dogs, and they outlined and briefly outlined below:

Origin of the husky breed of dog

The different kinds of the husky breed of dogs were first bred by the Eskimos of Chukchi and according to breeders, the ancestors of the Siberian husky breed of dogs were bred the people of Chukchi in the northeast part of Asia. The need to breed this species of dog was as a result of the fact that the people of Chukchi were nomadic and needed to expand their hunting territory in order to survive, so they bred a dog that could help them pull loads during long distance journey, as well as dogs that could survive under the cold temperature.

Breeders account that Siberian huskies first appeared in the U.S and in Canada at the time of the first gold rush in Alaska. The husky dogs are known to be superior kind of sled dogs that were used for sled races. Breeders also record that the husky dog could be Santa’s favourite dog because it leads the reindeer.

The Siberian Husky by the virtue of its origin were previously known as the Chuksha, or the Chukcha. Afterwards, the Siberian husky was also referred to as husky or sibe; sibe was derived from Siberian.

The husky breed vs the Alaskan Malamute breed of dogs

Some amazing differences between the alaskan malamute vs the husky

Other amazing facts about the Alaskan malamute vs the husky

It is said that in 1925, the husky breed of dogs was in the headlines of the news because a sled team of the husky breed medicine to Alaska, and Nome, during the outbreak of diphtheria in the winter of 1925.

These team of sled dogs had travelled through more than six hundred miles in the terrible condition of the environment and the total atmosphere within two hundred and eighty-eight hours, which is equivalent to a period of five and a half days. During the time, the team of the sled was led by the dog named Balto, a Siberian Husky breed. For such heroic deed, a bronze statue was built in the New York City in the honour of the Siberian husky Balto.

There are records that show that the husky breed of dogs equally served in the Arctic search of the Army, as well as in the Air Transport Command Rescue unit, and then in the Antarctic expeditions of the Byrd.

Breeders have stated that the Husky breed of dogs are the only breed of dogs that has the ability to change their body metabolism, and they do that quite easily. The ability to alter their metabolism is as a result of their ability to draw enough energy from a variety of sources, this gives them the energy they need to work or run for a long period of time without getting exhausted or even fatigued regardless of the quantity of food they had before they set out to carry out a task.

Following the track record of the Siberian husky, one can say that they are have strong adaptive abilities which is evident in how they survive the very cold weather, how their fur or double lush coats shields them from heat, as well as how they provide access to the shade and fresh water.

Not only is the husky breed known for its stamina, the husky breed is also famous for its aesthetic appearance. The breed has a very colourful fur that is quite dense and soft. It also sheds a lot, especially in the season of spring and during the fall, so you have to have a vacuum cleaner. Huskies have a very wide variety of colours, and are also identified by the spots on the head, and some different patterns found in other breeds.

The husky breed has a colour nose that matches the colour of its coat or fur. For instance, if the body of the dog is black, grey, or brown, the nose takes after similar colour except for the white dogs that have flesh coloured nose.

The husky breed of dog also has a condition that breeders call it the the snow nose. During that condition, some markings that are pink in colour appear on the nose during winter, and disappear during the summer.

Husky breeders say this occur in the husky breed because of the enzyme called the tyrosinase. This enzyme controls pigmentation in the body of the husky breed and is more responsive to lower temperatures.

The colour of the husky breed’s eyes could be amber or brown. However, the husky bred predominantly has blue eyes in its trait. Siberia Husky sometimes have breeds that have half-brown and half-blue eyes or weirdly one blue and one brown eye, which is also known as the heterochromatins. It also has an almond shape that enables makes it very easy for the husky to squint and as well keep out snow from getting into its eyes.

Both of these guys are amazing and have an amazing history and remarkable performance. Truly best of both canine worlds, than both canine names, these smart and hardworking dogs who also shower you with both love and affection when the job is done! They have many similarities but also have many differences.

Husky is predisposed to a few health problems, it needs a little grooming, it eats less and its initial cost is cheaper. However, Malamute is more independent, less likely to suffer from anxiety disorders, and is much stronger and more defensive than Husky.

They both need exercises and will destroy your house and garden if left untouched. However, they are both very smart and take up commands easily, so if you raise them correctly them well and taking care of their needs, none of this should be a problem.

With their wolf-like appearance, but cuter and fluffier, they are head turner of humans and other animals alike. Malamute is much larger, and is a better protection because of its guardian tendencies. So, if it is a guard dog then Malamute is probably the best option. Husky is a smaller version, but it has more goofiers and chattier than Malamute. So, if it’s a friendly family friend you want, maybe Husky is the one you can choose.

When it comes to choosing a canine companion, the question is never what is the best dog, but which dog is suits your lifestyle? So, the million-dollar question is, what breed has  drew your emotions and got right into your heart?